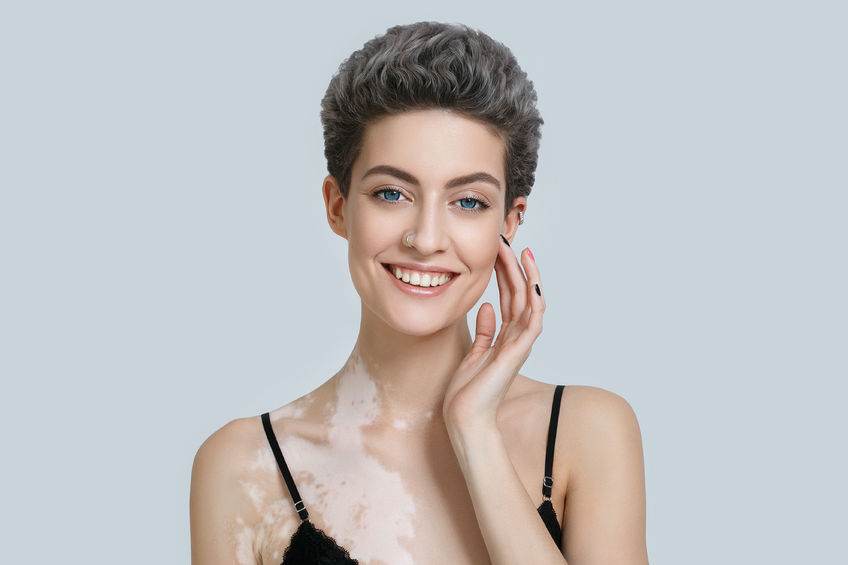 The natural treatment of breathing retraining and the Buteyko method are used to acheive a high body-oxygen level and reverse vitiligo completely. Many our students, within 2-6 months, achieved clear skin maintained later for years. In fact, all our breathing students who achieved a certain result in their breathing journey (see details below) had their skin cleared completely.

From 0.5 to 2 percent of people are considered to be affected by vitiligo globally. Most of them are under the age of 40, and few of them are below the age of 20. It is also considered as a disease which has a high possibility to run in families. It can affect people of all ages and genders. Vitiligo is considered to be influenced by a virus or autoimmune disorder.

A good thing about vitiligo is that it is not contagious. Vitiligo can affect people in different areas of the body like hair, mouth or even in the eyes. The affected area is more sensitive to sunlight. In most of the cases, the areas vitiligo effect remain unchanged throughout the remaining period of a person’s life. The visibility of the condition can be lessened by various methods like UVB light phototherapy, sunscreen, depigmenting, and other methods. How the discoloring will spread and how much will occur is an unknown factor in this disease.

Initial symptoms of vitiligo are unknown patches on the skin or white spots on the skin. A small paler skin compared to other parts of the skin is the initial symptom of vitiligo. The shape of the patches are not regular, and they are seen on the part of the skin which makes contact with the sun. The paler skin becomes white as the time goes. It will not provide symptoms such as irritation, dryness in the skin, and other similar symptoms. Main areas on which the patches may appear are:

Chronic over-breathing allows various abnormalities of tissues to grow in and on the body. It is by having a low body-oxygen level that vitiligo can grow. Chronic over-breathing or hyperventilation leads to a hypoxic body and suppressed immune system. This allows vitiligo to occur. Thus, low body oxygenation is the main cause of vitiligo. Secondary causes of vitiligo are due to the deficiency of melanin (A substance which gives color to the skin) and lifestyle factors. It is also called leucoderma.

The research conducted on vitiligo has led to a conclusion that it may happen due to a disorder in the autoimmune system or by various additional factors, such as:

Complications due to vitiligo

Vitiligo may have complications both physically and mentally. However, it may make the affected person mentally weak. They may feel awkward to appear before someone and may lead a life of unhappiness. Vitiligo patients may have other autoimmune diseases. Thyroid problem, anemia, and type 1 diabetes are some of the autoimmune diseases that are caused by vitiligo. Also, patients feel more pain because of sunburns. So the patients should be careful to protect the skin from sunburns as it may cause pain as well as make vitiligo expand. The affected patients may face complications like loss of hearing, increased tear production and alter vision.

Vitiligo is an issue in health which needs immediate concern. Having a high body-oxygen level will cure vitiligo and prevent it from re-occurring. X seconds is required to cure vitiligo (see the bonus content down below to see what body-oxygen level is needed 24/7 to cure vitiligo completely). This natural treatment requires breathing retraining and modifying lifestyle habits according to Dr. Buteyko’s standards. A daily practice of breathing exercise and the Buteyko method is needed until a person’s health state improves and then they can adjust their practice with only physical exercise. The physical exercise should be performed (intensively at later stages), and breathing should occur with only the nose throughout the exercise.

Various secondary methods are used to help with vitiligo, such as:

X seconds is needed 24/7 (together with a certain pulse range) to eliminate vitiligo completely.