Vitamin D (D3 or Cholecalciferol) is an essential steroid vitamin-hormone normally produced in the skin through sun exposure.[1] It can also be found in animal foods, such as fish. This sunshine nutrient performs vital functions such as the absorption of calcium and phosphorous. Its time period of half-life in the human body is about 10 weeks. Many people, however, are deficient in this nutrient. Such a serious deficiency could contribute to poor body oxygenation levels amongst 21st century man. 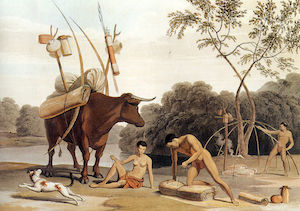 One may speculate that our prehistoric ancestors, who had superior blood circulation, wore little clothes and spent most their time outside. Their nomadic hunter-gatherer lifestyles and fish-rich diet would have allowed them to easily maintain adequate levels of vitamin D. Today, most people work indoors and burn easily in the sun. People have poor blood circulation and cannot maintain proper body temperatures without sufficient clothing most of the year.

“Before the year 2000, very few doctors ever thought that anybody was vitamin D deficient,” says Michael Hilock Phd., author of The Vitamin D Solution. “And then we began to realize around the year 2000 that as more and more studies were being done, especially from the National Health and Nutrition Examination Survey, that vitamin deficiency was very common.”[2]

The degree of vitamin D deficiency can be expected to vary depending on the amount of sun exposure a particular region receives. According to Statistics Canada, 32% of Canadian adults lacked adequate vitamin D levels. During winter months, this number climbed to 40%.[3]

Heading south, we see that Americans do not fare much better on their sunnier side of the border. According to the Center for Disease Control, 33% of Americans, between 2001-2006, had inadequate levels of vitamin D.[4]

Of course, these statistics may be grossly under-estimating the extent of vitamin D deficiency. The bare minimum level of 20ng/dL (50nmol/L) may only indicate extreme vitamin D deficiency, which causes diseases such as rickets. It may not be indicative of more subtle effects of a less fatal deficiency.

The following factors may indicate you suffer from vitamin D deficiency or are more susceptible to it:

How to Test for Vitamin D Deficiency

A blood test appears to be the most accurate way to determine if your vitamin D levels are too low. Ideally, the test would be done every six months, mid-winter and mid-summer

Mainstream medical studies claim that people with little or no health complaints typically have vitamin D levels between 50-70 ng/ml (125-175 nmol/L). Anything over 100ng/ml (250nmol/L) is generally considered in excess.

The Weston A. Price Foundation’s review of the literature, however, determined that insufficient evidence exists to confirm that vitamin D levels should exceed 30-35 ng/mL (75-88 nmol/L). In fact, they suggest that levels above 35ng/mL may cause toxicity.[10]

The Vitamin D Society admits that “nobody really knows how much vitamin D humans really require.” The organization, however, recommends blood levels between 40 ng/mL (100 nmol/L) and 60 ng/mL (150 nmol/L). This is cited as the levels found naturally in outdoor workers (such as lifeguards).[11]

Vitamin D research is still in its infancy with multiple viewpoints. Nonetheless, most research would seem to agree that levels below 30 ng/mL are inadequate.

Typically, you can request your physician check your vitamin D levels using a calcidiol blood test (also know as a 25-hydroxyvitamin D test). Another option is to use a mail order service such as D*Action Test Kit.

Alternatively, or in conjunction with a blood test, you could observe how different doses of vitamin D affect your morning CP. Also, observe any other positive or negative symptoms. 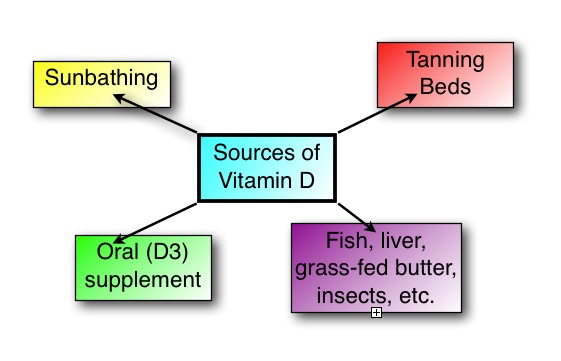 There are four ways to increase your vitamin D levels:

Generally, it is recommended that you use as many of the above methods at your disposal until you reach your target level of vitamin D on a blood test.

John, who lives in Southern Canada, had not experienced a cold or flu for over 15 months. He ate fish, drank cod liver oil, ate grass-fed butter and took plenty of sunbaths in the late spring, summer and early fall. In the winter of 2015, he decided to test taking 4,000IU of vitamin D3 supplements. The second day after starting the regimen he developed mild flu-like symptoms which lasted three days.

This may at first seem that the vitamin D3 supplement weakened his immune system. Instead, the added vitamin D3 may have strengthened his immune system. His immune system could then remove a long-standing infection that his body had managed to suppress but not eliminate. Like many beneficial lifestyle changes, one must be ready for an initial cleansing reaction. 12 months later John has not experienced another cold or flu since while continuing to take 4,000 IU of a vitamin D3 each day.

“There are very few supplements I recommend universally for almost everyone,” says natural health research Dr. Joseph Mercola in the following video, “but vitamin D is one of them… it’s recklessly irresponsible for human health not to address [vitamin D3] and pay attention to it.”[14]

Vitamin D deficiency should have a direct effect on one’s control pause (results of body oxygenation test) but this hasn’t been tested in trials yet.

One could speculate as to ways that low levels of vitamin D would trigger hyperventilation. For example, vitamin D deficiency causes calcium deficiency. Calcium deficiency would decrease alkalinity of the bloodstream. This increased acidity would cause the chemoreceptors to push CO2 down by triggering more breathing.

Vitamin D is also strongly linked to immunity. A poor immune function could allow a focal infection to take hold in the body. Focal infections are well known to produce chronically low CPs.

Deficiency in such a vital hormone will naturally put stress on the body. Such stress would lead to hyperventilation. Students can easily experiment with the various methods to increase vitamin D levels (listed above). See if your morning CP increases along with your vitamin D intake.

About the Co-Author: John C. A. Manley is a researcher and writer who shares alternative methods for managing and treating type-1 diabetes at DiabeticDharma.com.

[11] Masterjohn, Christopher. Update on Vitamins A and D