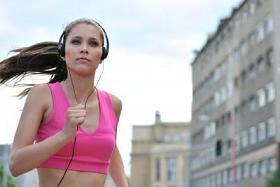 Breathing techniques when running and doing other exercises should be considered with one specific goal in mind:

how to maximize oxygenation of the body (or oxygen delivery to muscle cells) during running and at rest. This applies to long distance running, track and field, cross country running for beginners and people with asthma as well. Automatic breathing patterns at rest influence body oxygenation at rest, our automatic breathing techniques for running, and VO2max during exercise or endurance.

We control the following respiratory parameters in order to choose the best way to breathe for running: chest vs. belly (diaphragmatic) breathing; mouth vs. nose breathing; breathing frequency with breathing patterns; and tidal volume (the amount of air per one breath). However, before considering all these factors, we are going to analyze effects of body oxygenation at rest on physical fitness, endurance, and automatic breathing techniques for running.

As it is easy to observe, heavy breathing at rest results in relatively heavy breathing during exercise and that makes moderate or intensive exercise in the sick very difficult or impossible.

Respiratory methods while running: how to maximize fitness and body O2

While most people believe (and do that!) that we need to breathe more air, medical research tells us the exact opposite story. The slower and less we breathe at rest, the more oxygen and less lactic acid we have in body cells.

The reasons are simple. When we breathe even 2-3 times less than the medical norm or 3-5 times more than the norm, our blood oxygenation remains about the same: about 97-99% or nearly maximum possible. The main effect of hyperventilation is less CO2 (carbon dioxide) in the arterial blood and tissues of the body. This called “hypocapnia”, and it causes vasoconstriction (spasm of arterial blood vessels) leading to reduced blood flow to all vital organs and large skeletal muscles. Another effect of hypocapnia is the suppressed Bohr effect causing reduced oxygen release by blood cells in tissues or cells.

How to breathe while exercising and running: chest vs. diaphragm

This YouTube interview with Dr. Artour Rakhimov clarifies chest vs. abdominal breathing during running and exercise.

Since lower parts of the lungs get about 6-7 times richer blood supply due to effects of gravity, diaphragmatic breathing during exercise is a vital part of correct breathing techniques for running. Abdominal breathing, therefore, is a must for excellent physical health and maximum body oxygenation. However, if you don’t have automatic abdominal breathing at rest or during sleep, you are likely to have chest breathing during exercise. That worsens endurance and physical fitness. Chest breathing is exceptionally common in modern athletes and ordinary people, and one needs to get over 30 seconds for the body-oxygen test 24/7 in order to enjoy automatic diaphragmatic breathing at rest and during exercise. Abdominal breathing is crucial for success in long-distance running and cross country, and for any other longer contest.

If you want to impress your friends and people of the opposite gender by your running speed, and if you do not care about your breathing and body O2 when running, mouth breathing will likely be the best choice.

When my breathing students (sometimes athletes) have more than 60 seconds for the body-oxygen test, mouth breathing will not provide them any advantages even for sports contests. They naturally breathe through the nose even at maximum intensity for longer sessions (up to 1-2 hours or more).

Furthermore, any athlete can easily prove that, for the same intensity of running, mouth breathing causes increased heart rate up to 7-10 beats per minute in comparison with nose breathing only (in and out). The reasons are in two biochemical factors: nasal nitric oxide (a powerful hormone and vasodilator that we generate in sinuses) and carbon dioxide (most potent known vasodilator – see links below). Mouth breathing reduces concentrations of these chemicals in the lung and arterial blood causing double spasm of blood vessels.

Therefore, many modern fitness instructors and coaches teach that we need to inhale through the nose and exhale through the mouth. Other people advise combined nasal and oral breathing as the preferred breathing techniques for running. However, the best breathing techniques for running are based on strictly nasal breathing since it stimulates high altitude training and produces the most profound effect on VO2max growth, and higher hemoglobin levels and body oxygenation at rest in the long run.

Breath exercises when you run: breathing rate and tidal volume

Depending on the intensity of running, minute ventilation, and body oxygenation at rest (i.e., alveolar CO2 and tissue O2 levels), the breathing center naturally adjusts respiratory rates and tidal volumes during running. Many athletes and coaches may find that a certain rhythm of breathing (i.e., 2 steps inhale, 2 steps exhale) allows better physical performance, longer running at the same speed, fewer symptoms with asthma, etc.. This is probably true for their current physiological parameters.

However, in order to get maximum benefits from running, it is better to limit your ventilation slightly by taking less air through the nose and extending the exhale. With less than 20 s for the body-oxygen test, breathing manipulations during running is very hard due to too heavy breathing and low efficiency of O2 absorption. With over 30 s for body O2, it is much easier to have nose breathing and manipulate these two factors in order to get best benefits for endurance, VO2max, recovery rates, and overall health.

Tarahumara are native Indians living in Mexico. Running for very long distances is a part of their culture and daily life. For example, when hunting for wild animals, they simply run after them, until these animals, after hours of escape, drop from exhaustion. Many Tarahumara runners can run up to 100 km barefoot every day without problems with recovery and injuries. Even elite long-distance runners cannot endure 50 km per day. What are the causes or the secrets of Tarahumara running? Some people believe that they can run better due to their simple Tarahumara running sandals or Tarahumara running style. 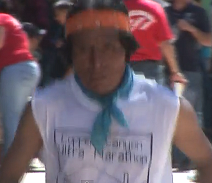 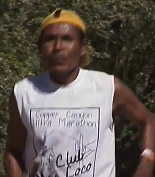 Here are some pictures of Tarahumaras running. You can watch YouTube videos with Tarahumara running style. Then you can discover that nose breathing during running is nearly the norm and provides the key to understanding their legendary abilities. If you think that nose breathing is uncommon and these are not typical pictures of Tarahumara runners, search on YouTube for “Tarahumara running” and watch them running. You will discover that their breathing while running is based either on only nasal breathing (in and out), or, for some Tarahumara Mexicans, mainly nasal breathing, while their mouth can sometimes be partially open.

What are the biochemical advantages of Tarahumara running with nose breathing? Strictly nasal breathing during running (in and out) produces the following effects on gas composition in the lungs in comparison with mouth breathing:

– increased CO2 levels in the lungs.

In fact, due to higher CO2, strictly nasal breathing techniques for running at sea level are even better than high altitude training. Nose breathing is hard for the unfit or poorly oxygenated people with heavy breathing at rest, but most beneficial for training and long-term improvements in physical fitness, long-term endurance, and VO2max. In other words, it helps a lot for long distance, cross country, and other contests.

Strictly nasal breathing techniques for running cause slower breathing and increased body-oxygen levels at rest later, after exercise and especially during the next night’s sleep. Therefore, it is suggested here that Tarahumara running secret is based on slow breathing at rest with alveolar and arterial CO2 slightly above the norm (40 mm Hg). Nose breathing drastically reduces anaerobic respiration in cells and lactic acid production accelerating recovery after long runs. The Tarahumara running technique causes the following effect: the longer you run, the better you are able to run.

The bottom line for breathing techniques for running and Tarahumara running.

If you breathe slower and less at rest (for automatic breathing techniques), you have more oxygen in body cells while resting and much higher oxygen utilization rate. As a result of these factors, you are going to breathe less during exercise, have natural nasal breathing techniques even at high intensity, and use inhaled oxygen much more effectively. Grounding the body (Earthing) is an important additional factor.

If you are interested in extreme sports or super fitness, consider using one great device for cardio exercises. It will help you to improve your fitness, VO2max and develop optimum breathing techniques for running. Application of this device allows you to double your exercise efficiency. Numerous top and elite athletes use this great respiratory device during their running sessions. Find the details below, as your bonus content.

Here are typical results that I see in my breathing students.

Natural lifestyle choices before and after breathing techniques