How to Stop Bloody Nose Bleed with an Easy Breathing Remedy


How to Stop Bloody Nose Bleed with an Easy Breathing Remedy 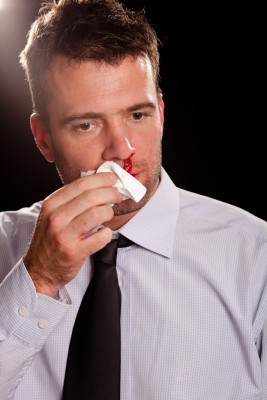 Warning 1
. You need to contact a physician if the victim has frequent or hard-to-control problems with his or her bloody nose.

Warning 2. Brain injury often results in severe nose bleeding. If a victim is bleeding from the nose after a trauma, such as a vehicle accident or fall, call 911 immediately.

For other situations, relatively healthy people (with no serious problems, such as heart disease, stroke, epilepsy, COPD, and so forth) can apply a very simple breathing exercise that teaches you how to stop a bloody nose in 2-3 minutes. It has over 90% success rate for light and moderate cases.

How to stop nose bleeding (instructions)

1. Lean forward and press your finger tightly (but not too hard) against your nose so it closes off the bleeding nostril.

2. Start deep breathing through the open nostril with nearly the same respiratory frequency as you have at rest. You need to take about 2-3 times more air per each breath. Your new breathing pattern (hyperventilation) is shown below with the blue line, while the black line shows your usual breathing.

3. Practice mild overbreathing for next 2-3 minutes.

4. Slow down your breathing back to your usual automatic breathing and check if the bleeding stops.

5. If bleeding is reduced about 2-3 times, but is still present, repeat overbreathing for 2-3 minutes.

6. If the bleeding hasn’t stopped in 10 minutes, you should head for the doctor’s office or emergency room.

Why “How to Stop Bloody Nose Bleed” breathing exercise works

Overbreathing reduces CO2 levels in the arterial blood. CO2 is the most potent known vasodilator. Therefore, hyperventilation immediately decreases blood flow to the brain and the area of bleeding.

You can also apply this exercise during dental surgeries. In fact, many dentists advise their patients to breathe more to prevent excessive blood losses and stop nose bleeding fast.

Most situations with bleeding involve pain. As a result of pain, it is common that people start to hyperventilate. However, nearly all cases of nosebleeds are nearly painless. Moreover, due to a shock, many people hold their breath, accumulate more CO2 in the blood, and this greatly increases blood losses.

Note that this overbreathing exercise reduces body O2 levels and should be used only as a temporary measure. In fact, in normal conditions when you don’t have problems with bleeding, you need to breathe slower and less for better health (see the Table below) to cure your nosebleeds permanently.

Vitamin C for frequent problems with a nose bleeding

Keep in mind that frequent nosebleeds often indicate a lack of vitamin C (ascorbic acid) in the body. Therefore, in order to prevent a bloody nose that is coming back, get a vitamin C supplement from a pharmacy or eat foods fortified with vitamin C.