In the video above, qigong teacher Volker Schmitz and Dr. Artour Rakhimov talks about amazing breathing benefits for qigong. 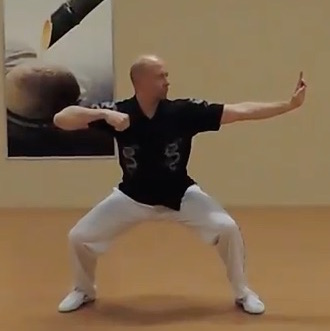 Qigong includes breathing practices that have been practiced for over 4,000 years. Some of the benefits and side effects of daily qigong exercises are said to be increased energy levels, endurance, power, and even lifespan as there are reports of qigong practitioners living for over 200 years. There is not just one way to practice qigong breathing techniques, as many different people have adopted different styles and methods over the years. For example, some qigong breathing practices have the practitioner engaged in full body movements, or in a seated position without movements, or in a standing position without movement as well. Most qigong schools agree with breathing using only the nose, bringing mindful awareness to the body’s postural alignment, and making sure that breathing is abdominal. Acheiving a body-oxygen level of 60 seconds for the control pause test allows these points to naturally occur. Similarily, breathing retraining in relation to a daily qigong breathing practice provides benefits and side effects of having a great amount of energy, using your nose for intensive breathing becomes easy, and your concentration becomes significantly improved. This occurs by Buteyko breathing method and Buteyko lifestyle points of diet, exercise, and sleep. Buteyko breathing has an important advantage of quickly lowering the amount of breaths we take per minute in our unconscious breathing patterns. This in turn, improves our body-oxygen levels.

Qigong is beneficial because it teaches the practitioner to breath abdominally, and also to keep their body aligned and relaxed at all times. Raising body-oxygen levels with Buteyko breathing allows proper posture to happen without thinking about it and an increase in blood flow. An aligned an relaxed body is good for our health because it creates clear pathways in our body for blood and oxygen to flow, where conversely a body with poor posture and tight muscles, would have joint pain, body parts and organs with low oxygen and poor function which ultimately leads decayed body tissue, organ failure, and a painful and quicker death.

Qigong breathing practices dictate that in order for the body to be properly aligned, that the muscles around the chest, stomach, shoulders, neck, and face need to be relaxed, but also that the breathing needs to be abdominal. In the beginning of a Buteyko breathing course, this is emphasized, yet with over 50 seconds for the body-oxygen test your body automatically relaxes and you naturally use your abdominal muscles in breathing. In qigong, the reason for abdominal breathing is especially important to qigong practitioners because they believe that the stomach, not necessarily the brain, learns habits or skills and that unless the practitioner is engaged in relaxed abdominal breathing, he will not retain or learn the skill that he had just been practicing. Doing qigong breathing practices, then, in essence, is the practice of learning proper physiological alignment by using your awareness to make a tweak in posture here or there, and then by using abdominal breathing to learn or engrain the habit/skill of proper alignment into one’s subconscious so that he may always be in proper alignment. Then, a lack of qigong practice would result in the continuation of poor physiological alignment, varying in degrees between people due to their environment and prior history of habits. For example, if a person has a posture issue where his neck protrudes forward, this person can use standing or sitting qigong to correct this bad habits by means of bringing awareness to his neck to make it straight, while engaging in diaphragmatic or abdominal breathing to remember this fix.

Qigong, then, is practicing good posture, while unlearning the bad postural habits that you have gotten accustomed to. And, once the qigong practitioner has embedded these healthy habits of good posture and abdominal breathing into his subconscious, he will then automatically and always carry out his daily activities with these principals of proper alignment in his every action, without having to even think about it. Whether he is walking, sitting, running, or standing he will do so with a proper structural alignment and diaphragmatic breathing because he has learned so with his stomach. Then, the practitioner can go on to learn other skills by automatically breathing with his diaphragm, and bringing his awareness now to whatever new interest he is learning. Therefore, using Buteyko breathing exercises and following Buteyko lifestyle habits can greatly help to rapidly improve your qigong practice.