Heal Thymus Chakra with NDT: Will to Live (Happiness)

Dr. Artour Rakhimov asks Lynn Himmelman about testing the thymus chakra point to see if it is weak and that means there is a desire to die. 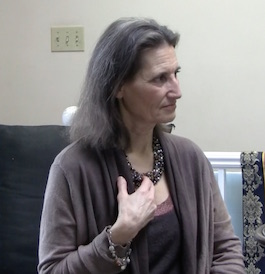 On this image, Lynn Himmelman shows the thymus energy point (muscular kinesiology chakra point) that is tested during the NDT (New Decision Therapy) checking procedure if this point is weak (indicating a desire to die and a need to heal with the NDT forgiveness process) or strong.

Dr. Artour Rakhimov asks about testing the three kinesiology chakra points on the body. The upper point is called the Thymus Chakra Point and at this point just below the collarbone we are looking to see if the person has a strong ‘desire to live’ and what it means that the chakra and the kinesiological point is weak. This is also about the spiritual functioning of the thymus gland, for its pain and healing. Many people have a weakness here. Lynn Himmelmann replies that when it is weak it indicates that the holding of negative emotion in the other two chakra and kinesiological points, the “CSX” and the “Heart Alarm” point has become substantial enough and accumulated to such an extent that it is having an effect on and impacting on that person�s will to live.

So on some level, they may be half in and half out of life, a feeling that things are difficult and they may want to escape, to evade reality. That can translate in the system as a will to die, albeit unconscious. This relates to the person’s thymus chakra pain, its kinesiology point, and its spiritual functioning. A person may not be consciously aware that they are �half in, half out� and Lynn says that she certainly wasn’t. Even while at a conscious level she would have argued that she was on board with living and that she was doing many things to try to get her life in order, it was undeniable as seen in the mirror stage of the therapy that she had actually been wanting to die for a long time, right back to the time when she had lost her sister.

That was a truth that she was not aware of it herself until the spiritual functioning of the energy pathways were opened. Not at the time she was in the mirror and healing the trauma but many months later she remembered the exact moment in time that she had wished that she was dead. That was a very auspicious and revealing moment for her to comprehend what a stronghold that will die had had on her before healing the thymus chakra. It had played severe havoc with her physical health when she was close to death’s door in her mid-thirties. It also played severe havoc with her ability to have and attract healthy, happy relationships and in many other ways.

Having a weak thymus chakra point makes people have negative emotions. For example, depression, anxiety, and guilt. When someone is experiencing these emotions they hyperventilate. By raising your body-oxygen levels you can prevent poor psychological and physical health.