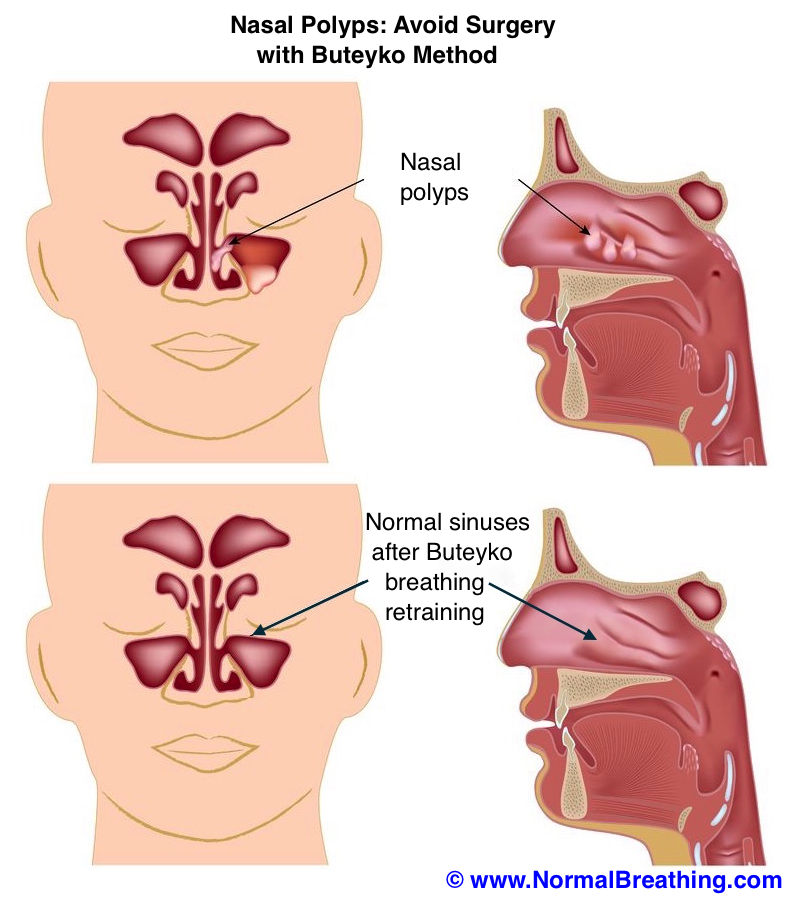 Nasal Polyps (NP) is a non-cancerous fleshy swelling or growth which develop in the lining of the paranasal sinuses, nose and the air-filled spaces which are linked to the nasal cavity. It is more common in men than in women. Polyps may vary in size. They may shape like teardrops which may have pink or yellowish-brown colors. Polyps may be small or large. Small polyps will not cause any problems. However, large polyps can block the nasal airway. Having a low body-oxygen content due to chronic overbreathing (24/7) makes the conditions for nasal polyps to exist. A low body-oxygen content is measured by the control pause test. People with nasal polyps over-breathe or hyperventilate according to their unconscious or automatic breathing patterns. The number needed for the body-oxygen test with a natural treatment to completely get rid of nasal polyps is X seconds (see X below in the bonus content) and avoid unnecessary surgeries (even for large polyps!).

The treatment of nasal polyps mainly concentrates on reducing their size or eliminating the polyps. However chronic sinusitis with or without polyps is one of the challenging condition that needs to be cleared up completely. Endoscopic surgery to remove polyps and to correct problems with the sinuses is only considered by most doctors when the drug treatments do not shrink the nasal polyps. The patients with nasal polyps should keep in mind that nasal polyps are not cancer. It is only a benigh swelling that happens due to certain conditions like asthma, infection, and other conditions. In most of the patients, secondary contributions to nasal polyps are environmental allergies. It is considered to impair a person’s quality of life more than perennial allergic rhinitis. But breathing retraining, as a natural way to treat polyps and avoid surgical interventions, has amazing effects on quality of life too.

Nasal polyps lack sensation and are soft. So it will not show any symptoms in most people. Also, small polyps may not have symptoms in every case. Large polyps tend to have chronic inflammation of the lining on the nasal passages and sinuses. Large polyps may obstruct the nasal passages and sinuses. If symptoms exist more than 10 days, it is better to see a doctor even if you want to try our amazing breathing retraining remedy.

The following symptoms are common in nasal polyps:

The prevalence of NP is considered to be around 4% in the general population. Children under the age of 10 rarely get them. At the time of the infection, the nasal mucosa becomes swollen, and its color becomes red. It is possible that it may produce fluid that drips out at that time. Continuous irritation makes the mucosa to form a polyp. The nasal passages may be blocked by the polyp. The chronic inflammation happens for specific reasons. Overbreathing is the main reason for chronic inflammation and the key cause of nasal polyps. Other secondary causes include allergies, drug sensitivity, and an immune disorder.

Additional factors that NP seems to grow is because of:

If adequate care is not taken certain complications may arise from nasal polyps. Those are:

Breathing retraining is a natural treatment that can eliminate nasal polyps. It is through a disciplined practice of breathing retraining and the Buteyko method. Also, by following Dr. Buteyko’s lifestyle tips that will make people succeed. Following this practice increases a person’s body-oxygen level. A higher body-oxygen level gets rid of various abnormalities in the body and allows to avoid surgeries (for NPs too).

Medicines can help in relieving symptoms, but rarely get rid of nasal polyps.

The number needed for the body-oxygen test to completely get rid of nasal polyps is X seconds and is given below.

Get over 30 seconds for the morning CP test for 3 weeks and less than 70 for pulse while sitting. This eliminates polyps naturally.