Are Mindfulness and Meditation Behind Success for the Best Trial on Cancer?

This question appeared in comments of popular meditation and mindfulness blogs. Indeed, since the participants of the best ever-known clinical trial on metastatic cancer (in the whole history of oncology) practiced breathing exercises (about 2 hours daily for … 3 years), one can claim that mindfulness and meditation were a significant part of their work with their minds, while breathing retraining was a physiological part that helped the body to increase oxygen levels in tissues.

Let me remind here that numerous clinical trials found that these common known techniques, such as chemotherapy, radiation, and surgery increase lifespan of patients with metastatic cancer reducing their 3- or 5-year mortality by about 10-20 percent. These are the reasons why professional oncologists and medical cancer specialists give advise to most of their patients with metastatic cancer to use these popular clinical modalities. However, in this clinical trial of metastatic breast cancer, apart from using these methods, patients who diligently practiced breathing exercises reduced their 3-year mortality by nearly 6 times. You can find more details about this trial in the Amazon book “Doctors Who Cure Cancer” by Dr. Artour Rakhimov.

Numerous other cancer trials discovered positive effects of meditation on quality of life, reduced inflammation, stress, fatigue, and depressive symptoms, as well as improved sleep. However, to our knowledge, there are no trials which measured effects of meditation or mindfulness techniques on survival or mortality of cancer patients.

Could meditation and mindfulness contribute to such great success in cancer treatment? This is a legitimate question since the original study suggested that increased carbon dioxide levels in the expired air testified about larger CO2 levels in body cells. This shift towards normal CO2 values caused dilation of blood vessels, enhanced the Bohr effect, and provided more oxygen to cells of the body, as well as to malignant cells of cancer tumors.

Indeed, this clinical trial emphasizes that breathing less air and higher CO2 levels in body cells increase oxygen transport to tissues. You can find my analysis of this publication “Study of application of the shallow breathing method in a combined treatment of breast cancer” here: best cancer trial.

Increase in CO2 as the main effect of this cancer trial

However, one of the essential additional effects of breathing less air and higher CO2/O2 levels in the brain relates to certain specific effects on the firing of nerve cells. CO2 controls the threshold of excitability of nerve cells during their communication with each other. This threshold is present in order to prevent the appearance of accidental or spontaneous and asynchronous firing of cells of the nervous system

The normal threshold of excitability of nerve cells, in mammals, is about 50 millivolts. That happens when cellular CO2 levels are normal. During hyperventilation, a small reduction in CO2 levels in the brain, below the norm, causes increased excitability (or “irritability”, as many physiological studies called it) of nerve cells. This happens due to the lowered threshold of excitability. This leads to “spontaneous and asynchronous firing”, as we discussed before.

As a result, dozens of clinical studies proved that carbon dioxide has sedative, calmative and tranquilizing effects on the brain cells. In other words, CO2 is crucial for normal work of the nervous system.

But since people with chronic diseases, cancer included, commonly suffer from overbreathing (see the Homepage for studies, graphs, and charts), it is normal that these people suffer from mental chatter and reduced abilities to get focused with decreased attention span. 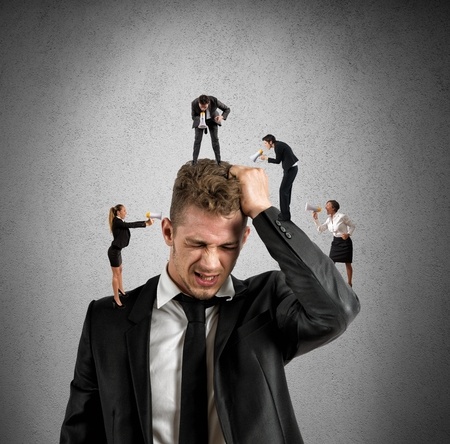 Therefore, breathing retraining has a strong natural effect on the elimination of mental chatter naturally. Breathing less air creates conditions that allow people to focus on real-life topics. This is a common “side effect” that makes mental focus and concentration easy and organic.

Q: What about mindfulness and mental effects of Buteyko reduced breathing exercises practiced during this amazing cancer trial?
A: The Buteyko reduced breathing technique demands concentration on one’s breath. Any time, when the attention of a breathing student is displaced on irrelevant topics, he or she needs to become aware of this deviation from the goal. Then the student should return their focus to the present moment and restore mental concentration on the required bodily sensations. This surely sounds like and looks like one of the meditation techniques.

If we go into details, the purpose of this reduced breathing technique is to reduce the length and depth of one’s inhalation and produce relaxed effortless exhalations. This is how the method works at the initial stages of learning for students with less than 20 s for the body oxygen test). As a result, breathing frequency of novices or people with chronic diseases during this practice is usually higher than at rest or just before the session.

At later stages, when the CP is over 20 seconds, reduced breathing is conducted with an additional focus on extended exhalations and increased automatic pause. This later stages of the process are accompanied by further changes in automatic breathing. One of the key factors of this process is appearance and extension (in duration) of the automatic pause, which is the natural pause or delay between an exhalation and the next inhalation during automatic (unconscious) breathing at rest, for example, during sleep or while sitting.

For details related to exact numbers on this relationship, one needs to refer to the Buteyko table of health zones. Here is an image that was made many years ago for 4 common regular breathing patterns. This image has been present on pages of this website since 2010. 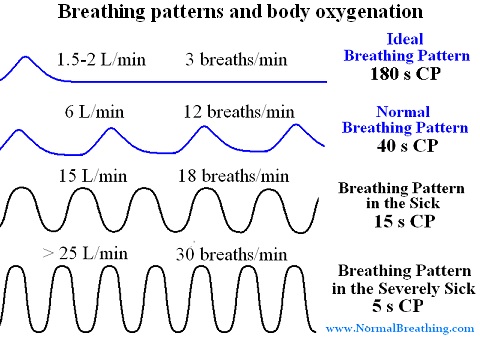 Relaxation as a key factor of reduced breathing

Here is a video which features Dr. Artour Rakhimov who discusses advances in the Buteyko method in the area of mindfulness and meditation breathing exercises.

Whatever the level of learning, when students practice this breathing technique, they naturally spend as much time in total relaxation (even no breathing movements) as possible. In fact, Buteyko was once asked by a journalist,
“People say that your breathing method is very hard to practice. Can you please explain to us, in a few words, how to practice your breathing exercises? What we need to do?”.

Buteyko replied,
“Nothing, absolutely nothing…You even do not need to breathe…”.

Does it look like any of known meditation techniques? Yes, there are four ancient meditation techniques that are among the oldest ones, and they also closely relate to and even very similar to the breathing exercise described above. “The Vigyan Bhairav Tantra” is 50 century old ancient Sanskrit text on meditation. It describes a conversation between the god Shiva and his consort Devi or Shakti. This book includes 112 meditation techniques.

The very first 4 of them are meditation techniques related to … breathing. (Just this fact alone can testify about a special role of breathing meditations among all others.) However, due to age-related factors, possible changes in language (and meanings of words) and translation, it is probably impossible to find out the exact instructions for these meditation techniques (i.e., how to practice them). As with ancient Egyptian papyrus papers, people would provide those meanings to these millennial-old texts which suit their current habits, superstitions, and visions of the world and life.

So far, I could not find accurate instructions on how to practice these ancient meditation breathing exercises. You can find exact quotes from this Sanskrit text and my interpretations of these 4 most ancient Indian breathing meditation and mindfulness techniques right below here as your bonus content.

1. Radiant one, this experience may dawn between two breaths. After breath comes in (down) and just before turning up (out)—the beneficence.

This likely means that focusing on the automatic pause during breathing awareness is the way to evaluate (and regain) health.

2. As breath turns down from down to up, and again as breath curves from up to down—through both these turns, realize.

This meditation method can refer to the lengthening of the automatic pause during breathing practice. In other words, try to remain relaxed and with no breathing after your usual exhalation.

3. Or, whenever in-breath and out-breath fuse, at this instant touch the energy-less, energy-filled center.

“Breathlessness is deathlessness” is an expression from the Science of Kriya Yoga. This is also the ultimate goal of the Buteyko method (to slow down breathing to nearly nothing, with 2 L/min for minute ventilation, and only 3-4 small breath during sleep and automatic breathing).

4. Or, when the breath is all out (up) and stopped of itself, or all in (down) and stopped – in such universal pause, one’s small self-vanishes. This is difficult only for the impure.