Warning. Buteyko exercises and air hunger (shortage of air) can cause serious GI problems and damage to the GI tract if you practice your breathing sessions with solid food in the stomach. Therefore, as for physical exercise, practice Buteyko breathing exercises only on empty stomach (water is acceptable).

Now you are able to consciously create and maintain light air hunger while breathing using the diaphragm (or stomach) and you only relax it for exhalations. Let us review the process of the RB (reduced breathing) in more detail.

If your CP is below 20 s, follow these instructions

To practice Buteyko reduced breathing exercise, instead of taking a big and deep inhalation, take a slightly smaller inhalation (only about 5-10% less than your usual inhalation) using the diaphragm and then immediately relax all muscles, especially all breathing muscles. Then immediately, repeat the same: take a (smaller) inhalation and again completely relax. 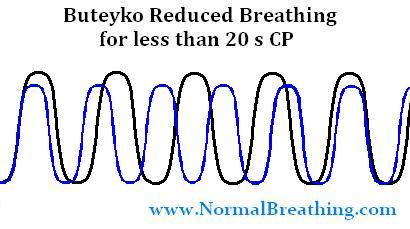 The blue line in this picture shows the pattern of RB (reduced breathing) for low CPs (less than 20 s). The black line is your breathing pattern before the exercise.

In 2-3 minutes you will experience light air hunger (or light desire to breathe more). Your goal is to preserve this light comfortable level of air hunger for about 5 minutes.

It is normal that breathing is frequent during your reduced or shallow breathing. The crucial thing is that you breathe less, your inhalations are less deep, and you are relaxed.

If your CP is 20 s or more, follow these instructions

While practicing the Buteyko reduced breathing exercise, the students with higher CPs (over 20 s) not only slightly reduce their inhalations but, in addition, they can have short periods of total relaxation with no breathing. 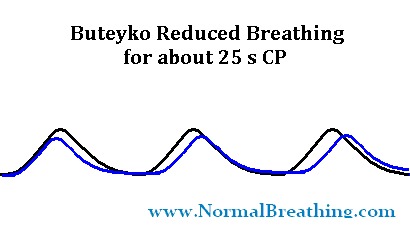 This figure shows reduced breathing when the CP is about 25 s: first, inhalations are smaller than the original ones (black line); second, the duration of exhalations and pauses of total relaxation are longer. Hence, you breathe slightly less air and also slightly slower.

What should you do during the reduced breathing

The Buteyko reduced breathing exercise should cause a light shortage of air (air hunger) in about 2-3 minutes. It requires some experimentation from the student to find out the depth of inhalations and durations of automatic pauses (no breathing).

For example, with about 20 s CP, one’s RB probably does not require any pauses. Each subsequent inhalation immediately follows the previous exhalation, as described in the previous section.

When the CP gets larger, the duration of automatic pauses at rest and during this exercise is also increased. For example, with 40 s CP, the student can usually have about a 5-6 s automatic pause after each exhalation during the whole RB period, with 60 s CP having about 10 s for total relaxation, and so forth. Mental counting is useful, but not necessary.

Your next step (for any CP): practice the RB for about 5 minutes

When you practice the Buteyko reduced breathing exercise for 1-2 minutes, you should get a light feeling of air hunger (you want to breathe more but resist the desire and teach your own body to have lighter breathing). The key of the exercise is to maintain this shallow, diaphragmatic breathing pattern for about 5 minutes with a relaxation of all muscles and a light hunger for air.

Another practical suggestion, which was emphasized by Dr. Buteyko, is that under no circumstances should you, have large deep inhalations or quick exhalations during the RB. Breathing, especially exhalations, should be under full control and totally relaxed. You do nothing for exhalation, just relax all body muscles.

Every time you get a desire to take a deep breath by chest expansion, calmly and consistently relax all muscles, especially chest-shoulders-neck-jaw muscles, and continue to breathe less using the diaphragm.

The level of air hunger during the RB session should be light and comfortable, no more than at the end of the CP, (it is felt, but comfortable enough and easy to tolerate). During the first breathing sessions, this sensation of air hunger is unusual and, for some people, unpleasant. However, after realizing the relaxing and inspiring effects of first sessions, these unpleasant effects disappear.

If you breathe too little

Occasionally, a student is so motivated to breathe less that they start to breathe too little, e.g., 2 or 3 times less than before the Buteyko reduced breathing exercise. This may be possible for about 2-3 minutes only. But the body automatically adjusts to any level of breathing. Hence, later the degree of biochemical stress for the body can be so high, that it will be impossible to suppress very deep and heavy gasps for air. Hence, again, keep the level of air hunger light and comfortable.

How Dr. Buteyko described the essence of the RB

The manual written by Dr. Buteyko (Buteyko, 1991), suggests that in order to remember the essence of the Buteyko method (shallow or reduced breathing), one can use the rule of “The left hand”. “This rule contains 5 points (5 fingers, starting from the thumb):
1. decrease
2. the depth
3. of breathing
4. by relaxation of the diaphragm
5. till the sense of air shortage” (Buteyko, 1991).

The last point, according to Dr. Buteyko, is the most difficult to learn.

In other words, take smaller diaphragmatic inhalations with relaxed exhalations and a sensation of light air hunger.

Note that the frequency of breathing is not important in the Buteyko method. Breathing less with the relaxed diaphragm is the key. Buteyko breathing consists of a shallow, low-volume voluntary breathing pattern.

Review of the main factors

In short, the main factors of the Buteyko reduced breathing exercise are:
– smaller inhalations using the diaphragm only;
– passive and relaxed exhalations (without any efforts applied, all muscles are just relaxed during exhalations);
– light air hunger;
– thorough relaxation of all body muscles;
– correct body posture;
– comfortably cool environment;
– good air quality;
– empty stomach (water is OK);
– nasal breathing only and no speaking.

Each of these conditions is crucial for success.

What you would feel during and after correct RB

If you breathe less, during the RB period, you will notice the following signs:
– The arms and feet will get warm in about 2-3 minutes after starting the RB (this is the central and most important sign present in over 90% of students who practice it correctly).
– The nasal passages will be clearer (especially when the nose was partly blocked before).
– The nose will often become moist and cold in about the same 2-3 minutes. (However, this effect will not take place, if air quality is unsuitable for you or if you have chronic problems with sinuses and nasal breathing.)
– The diaphragm will become slightly tense and unsettled. Indeed, if you breathe less, your breathing center tries to intensify respiration, while you are doing the opposite job: teaching the breathing center how to breathe less.

There are many other individuals and occasional signs and symptoms indicating that the student is breathing less:
– tears in the eyes;
– increased salivation;
– restoration of the muscular tone of the transverse colon and stomach leading to the natural desire to sit straight;
– the desire to flex and stretch arms (especially after the session);
– feeling of increased energy (or feeling of being charged);
– feeling of being focused (instead of confused and indecisive);
– reduced hunger for food, addictive substances, etc.

You may have some of these additional symptoms or none of them.

2015 addition. You can get additional benefits from reduced breathing exercises, if you follow the suggestion below, provided here as bonus content.

Learn how to focus your mind on the sensation of your breathing only. As soon as your imagination wonders away from the sensations of your breath, return your attention back. Then you will transform the reduced breathing exercise into meditation mindfulness practice. Your goal here is to teach your mind to stay totally focused, and this is not easy unless you have 2-3 minutes CP. With more practice and higher CPs too, you will notice that thoughts in your mind (“mental chatter”) are going to subside. Then you will see yourself and the world around you with more clear eyes.