How much to exercise and other factors 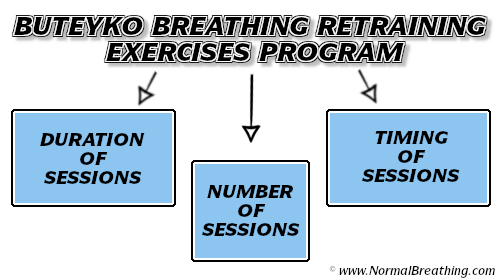 When Buteyko wrote his first manuals with the description of the method for medical doctors, he suggested 3-4 hours of Buteyko breathing exercises every day. This was the amount of training that he and his colleagues recommended to their patients. Many of these patients were hospitalized and, therefore, had a lot of time and, in most cases, a strong desire to practice. Patients who followed this rigorous program of breathing retraining experienced quick and dramatic health improvements. In a typical situation, a former patient with numerous hospitalizations – using various medications – in 3-6 months could jog and exercise rigorously while breathing through the nose, climb 5-7 flights of stairs with a closed mouth and no signs of the disease that kept him crippled for years.

What about those people who have little time but still want to learn the method? In other words, what is the minimum amount of daily practice so that there are positive changes in the right direction (breathing less)? The student should spend about 1 hour per day for breathing exercises in order to experience gradual improvements in breathing. (That has been my requirement for many years, which I mention when I teach groups. Note that due to strict adherence to positive lifestyle changes, my students usually get 3-5 s of CP growth in 1 week. However, with the use of the DIY or Frolov breathing device, they often get up to 6-8 s CP increase in a week, while practicing less than 1 hour.) One session lasts about 15-20 minutes. Therefore, 3-4 sessions should be done every day, with no more than 1 breathing session every hour.

Personal persistence and self-discipline are the main tools for progress. It is no accident that the Buteyko method was called “wilful liquidation of deep breathing” in the USSR, emphasizing the willpower aspect. (Some Russian patients invented the other, grotesque name “the Siberian method of self-suffocation”.)

Severely sick students, as practice shows, are the most diligent students. However, many people in the West used and use a mild approach with 3-4 sessions per day. Also, many Frolov students have up to 2-3 hours per day for their breathwork.

Important note about the duration of breathing exercises

When teaching students, online or during live classes, my common requirement is to have 1 hour for breathing and 1 hour for physical exercise per day. However, some students may need up to 2-3 hours of breathwork in a day to get even 15 or 20 s for their morning CP. This is not my invention. Buteyko doctors in the Moscow Clinic have the same requirement right now. It was also required by Dr. Buteyko and over 150 MDs he trained from their patients.

First of all, when we discuss CP progress, we are talking about changes in the morning CP. Next, if we consider a typical daily log by its morning CP numbers, these numbers are quite variable and rarely show solid progress from one day to the next. However, if we consider the average morning CPs for one week, then it is possible to compare one week with the next one. Therefore, progress in breathing retraining can be measured by changes in average numbers for the morning CPs.

I have been using this approach (how to measure progress in the Buteyko method and breathing retraining) since about 2007-2008 teaching this idea to all my students during the ordinary course.

One’s breathing remains easier and the CP higher for some hours after the session. Later, the influence of other factors (stress, meals, lack of physical activity, poor posture, etc.) will make breathing heavier and reduce the CP. However, the student does another session and the process of breathing retraining continues. This process and the dynamic of the CP, pulse, and symptoms can be analyzed later.

As it is explained above, day to day, the CP usually does not increase steadily. During some days the CP can be lower than during the previous day. However, if the student does at least 3-4 short sessions every day (about 1 hour in total), the CP will improve by at least 2-3 s in a week’s time.

As another good alternative, the student can practice the RB all the time while awake and has no solid food in the stomach. Such a student can progress up to 5-10 s CP per week or even faster (if very motivated and able to overcome own limitations and poor lifestyle choices). This linear progress usually takes place until the student reaches 40 s CP. This is a very important threshold. The further progress relates to Level 3.

There are even more severe restrictions, with respect to air hunger, that is required for some people with, for example, a loss of CO2 sensitivity, sleep apnea, and heart disease. Their safest exercises are relaxation, progressive relaxation of the body and relaxation of the diaphragm without any voluntary changes in breathing and with no air hunger. Later, when the CP is about 20 – 25 s, even previously severely sick people can do the CP and practice RB with air hunger and no unpleasant effects.

When the novice starts to practice, it is important to understand that breath holds and any air hunger, in the lives of many people, are associated in the brain with extraordinary situations (e.g., suffocation or drowning). Hence, the mind, instead of getting alarmed, needs to learn how to accept breath holds and air hunger positively. This task is solved faster and easier if the level of air hunger for first breathing sessions is so light that the muscles of the body can be totally relaxed.

Later, after many sessions, the nervous system will learn that there is no danger in breath holds and air hunger. Then the student can practice longer breath holds (extended pauses and maximum pauses) and comfortably accept intensive Buteyko or Frolov-DIY sessions with moderate and strong air hunger if he or she found them more effective.