You can dramatically reduce your marathon time — as much as half an hour — if you change the way you breathe.

How to Run Marathon 30 Min. Faster (By Changing Your Breathing Pattern At Rest)

In this video, Dr. Artour Rakhimov will explain how to run a marathon 30 minutes faster with breathing retraining.

Every person has a certain breathing pattern, which goes on day and night. This can be measured in many different ways. Breathing frequency (or number of breaths per minute), minute ventilation (or number of liters of air breathed in per minute), carbon dioxide levels (circulating in the blood), and the body oxygenation test (also known as the CP test, a do-it-yourself test, which is discussed on normalbreathing.com), are some of the many ways that scientists can measure the nature of one’s breathing.

Of course, marathon times, as with any endurance sport, are also exhaustively measured. In fact, according to a review done by the popular running magazine Running USA, in 2016, the average marathon time for males was 4 hours and 20 mins. And for females, 4 hours and 50 mins.

In 25+ years of coaching people to improve their breathing, it’s my experience that by optimizing breathing patterns, average athletes are able to easily improve their marathon times by upwards of approximately 30 mins. without additional running training. From the average marathon times, that’s an improvement to 3 hours and 50 mins. for males and 4 hours and 20 mins. for females — again, without additional physical training.

If you are not familiar with breathing retraining and have not studied the science of respiration, this might seem absolutely ridiculous. But it’s true.

Coaching many athletes, both amateur and professional, and in my own experience as a cross-country skier — captaining the Moscow University Cross Country Team in the 1990s and traveling to many international competitions — I’ve seen increases in sports performance first hand when athletes are able to reduce their automatic breathing pattern (i.e., how they breath 24 hours a day) by approximately 2 to 3 times.

(Note that breathing retraining would not give a 30 min. improvement across the board for all athletes. For elite athletes, like runners competing on a world-class level, the improvement from breath retraining would be much smaller, somewhere around several mins., or maybe closer to zero, as these people have already optimized functions of their body due to decades of training and thousands of km. of running. Improvement in this population is quite challenging to achieve. At the same time, I believe many elite runners could achieve an improvement of 1-2% with breathing retraining, if they have not already used it, which is a highly competitive field is quite significant.)

To understand how this works, it’s important that you are familiar with the Buteyko Table of Health Zones.

Created by leading Russian physician and physiologist Dr. Konstantin Pavlovich Buteyko (1923 – 2003), the Table of Health Zones defines levels of health — from sick people down at level 1 to the super fit and healthy at level 12 — through various parameters of breathing.

According to recent studies done by physiologists on breathing patterns in Western populations, the average person is described by level 3 of 12 in the Table of Health Zones. What does this mean? It means that an average person breathes about 12 liters of air per min. (See homepage for numerous research studies.)

(For context, respiratory studies done in the early 20th century, reported average ventilation at approximately 6 liters of air/min. This shows that average health has worsened in the last century due to increased sedentary lifestyles, as well as a range of other negative health factors associated with modern living.)

Physiologists discovered that when people have heavy breathing, more than 10 l/min., they actually suffer from hypoxia, or a low level of oxygen at the tissue level. Paradoxically, as explained on the homepage, generally speaking the more air one breathes, the less oxygen is able to diffuse to tissues like muscles, organs, and brain.

You can determine how much oxygen is in your tissues, and where you are on the Buteyko Table of Health Zones, by using a simple DIY test called Control Pause (CP). The CP represents your stress-free breath holding time. (More information on measuring CP is here.) How you do this is, take a normal inhalation and then normally exhale. Then pinch your nose, hold your breath, and begin counting seconds with a clock or stopwatch. When you feel the first sign of stress (what is called air hunger), then stop the count and see the number of seconds. (After a proper CP test, the breathing should return immediately to your pre-test breathing pattern; there should be no aberrations or jerks in the breath. If there are, then you have overestimated your CP.)

As the Table of Health shows, for an average person at Buteyko level 3, breathing 12 liters of air/min., the CP is approximately 20 seconds.

Physical exercise is a key factor to improving health to retrain breath, according to Dr. Buteyko. But for maximum benefit, Buteyko advised that all physical exercise should be done 100% with nose breathing. While exercise performance levels are better for athletes with mouth open at Buteyko Level 3 and below, still they will not be able to approach performance of athletes with nose breathing at CPs above level 6. And training with mouth open, one will not be able to achieve a CP that corresponds with health level 4, much less 6.

Indeed, many top runners from Africa, also the famous indigenous Mexican runners the Tarahumara, virtually always breathe through the nose when they run. In fact, many top middle- and long-distance runners who have won Olympic records in last Olympic games were shown to breathe 100% through the nose.

One of additional benefits of breathing through the nose, apart from high CO2 levels, is that nitric oxide is released, dilating blood vessels and improving oxygen circulation in the body. This translates to improved sports performance.

In order to breathe through the nose while exercising, one must have very light breathing at rest. For example, a person at what Dr. Buteyko labeled as health level 5 would, on average, breathe approximately 6 l/min. Which means they breathe twice less than the average of 12 l/min. And for someone who achieves a Buteyko level of 7, or a CP of 60 seconds (what Buteyko defined as normal health), that means that these people would breathe about 4 l/min. Or three times less air than the average person.

Research into human physiology shows that as breathing slows to 6 and 4 liters/ventilation/min., then oxygen levels substantially increase in brain and muscle tissues, which greatly affect muscle performance in running activity. 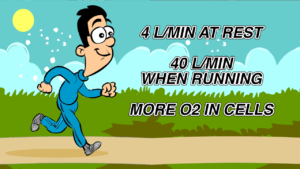 If you ask the average person to breathe as fast as possible, to have maximum possible ventilation, that would be 150 l/min. So 120 l/min. is very close to this, and to do that through the nose is impossible. But 40 l/min. is quite possible to breathe through the nose, and that is exactly what you see when seeing extremely fit people running or participating in sports. You can hardly notice their breathing.

(Note: It’s exactly opposite when people are sick and out of shape and try to exercise. One can hear their breathing from 50 to 100 meters away.)

[Image: Person out of breath]

So how can one change their breathing pattern to breathe very lightly and calmly — from the average 12 l/min. breathing to 4-6 l/min?

That is the aim of the Buteyko breathing practice, information for which is provided on this website. Retraining the breath, which is often unconscious and automatic in most people, requires effort. One must strive to become more conscious of breathing, and then retrain it. This may take many months, and for some is the most challenging, but most rewarding health intervention that one can engage in, to not just improve sports performance but also solve virtually any health problem, including cancer, heart disease, diabetes, and asthma.

Note: It is my experience from fit people that breathing through the mouth — say above a CP 60 — will not provide advantage to run faster. All students I have who have achieved a high level of health do not like the experience of breathing through the mouth, because doing it through the nose one feels calmer, more relaxed, and with an alive and balanced mind. Additionally, nose breathing prevent the body from overexerting itself, which is very important in long-term injury prevention.

In summary, retraining breathing can give a huge advantage to marathon runners, because it does not involve additional intensive physical training. And that is a smart way to train, because once you retrain the breath, physical training (through the nose) becomes very comfortable. (On the other hand, people at average 12 l/ventilation/min. find physical exercise very uncomfortable, cannot breathe through the nose, and tire easily.),

In fact, people at high levels of health actually crave and enjoy physical exercise. It’s something the body likes.

Who would have thought? Running marathon could be fun!

For more information on how to retrain breath, read here.