fluid on and in lungs: Low Blood Flow and Low O2

Cause of fluid on and in lungs 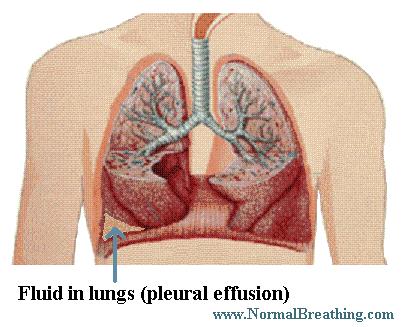 fluid on and in lungs (pulmonary edema) takes place due to abnormal transport of ions and water across the surface of the lungs. There is a similar condition that leads to accumulation of fluid on lungs.

It is known that transport of ions of sodium and potassium, as well as blood components across various surfaces of the human body, is an active process (it is called “active transport”) that requires oxygen.

Water, as most researchers suggest, is mainly driven by passive diffusion depending on osmolality gradient. Therefore, accumulation of fluid in lungs is usually governed by dis-regulation of normal processes. What are the likely causes of fluid in lungs and on lungs?

As soon as a person has regular diaphragmatic breathing (even 3-5 small breaths per minute), all parts of the lungs are going to have sufficient amounts of O2.

The problem with very low alveolar O2 or alveolar hypoxia can appear either at very high altitudes or due to habitual chest breathing (which is present in most people). Chest breathing, due to its mechanics, does not provide fresh air for the low parts of the lungs causing alveolar hypoxia.

Therefore, if we consider people living close to sea level (not at high altitude), chest breathing is one of the contributing causes of fluid in lungs. Note that there are studies that directly confirmed that hypoxia reduces Na+ transport (e.g., Mairbourl et al, 2002).

The disappearance of hypoxia after birth probably explains why the newborn is able to get rid of fluid in lungs very quickly after they are born since the newborn have in-built automatic diaphragmatic breathing.

Depending on the location of fluid (pleural space or alveolar space) and other factors, accumulated fluid can have a different composition. Clinical evidence suggests that there are numerous health problems that contribute to the appearance of fluid in lungs, such as cancer, tuberculosis, congestive heart failure, pneumonia, and recent surgery.

According to the laws of physics, electrical potential has a tendency to accumulate on outer and inner surfaces of the human body. Measurements show that a very-large-electrical voltage can be present on lung surfaces when a person is ungrounded (electrically insulated from Earth).

When one gets an electrical jolt (or shock) while touching metal objects, the corresponding voltage is about 2,000-5,000 volts of a positive charge (deficiency of electrons).

A grounded person has only a minor negative charge, which is less than 1 volt (the same as Earth’s potential). Such huge-positive-electrical charges of ungrounded people (accumulated on lung surfaces as well) can have a large impact on electrogenic transport of ions (which is one of the important transport mechanisms across alveolar epithelial cells).

Treatment for fluid on and in lungs

Warning. Contact your healthcare provider before using any breathing exercises if you have fluid in or on the lungs. Pulmonary edema is a very serious health condition.

Hundreds of Russian patients managed to get rid of their recurrent problems with liquid in lungs and on lungs due to two different medical techniques that are popular among over 600 Russian medical doctors. These doctors teach either the Buteyko-breathing method or breathing exercises with the Frolov device.

Their patients, as it was reported, used these breathing methods after thoracentesis (a medical procedure to remove fluid from the space between the lungs and the chest wall).

If you are going to have a thoracentesis, you need to insist that this surgery is done with grounding, which is currently a must for all major surgeries. Electrical grounding of the human body eliminates post-surgery inflammation and bruising associated with tissue injuries caused by lack of grounding.

After thoracentesis, one can apply to ground together with Buteyko breathing exercises and lifestyle changes that increase body-O2 content. Later, after sufficient healing of the injury caused by the surgery, the Frolov device can be used.

Elimination of automatic chest breathing (at rest or during sleep too) usually requires nearly normal results for the body-oxygen test. But people with fluid in lungs have less than 20 seconds (often less than 15 s) for body O2.

If people with fluid in or on lungs achieve a certain result for the CP test (in seconds), their problems with extra fluid quickly disappear. You can find out the exact number right below here as your bonus content.

Up to 35+ seconds 24/7 is generally required, but sometimes even 25+ s CP can be enough to revere this condition.

Normalization of breathing and body O2 also normalizes many other key parameters, such as immune function, transport of ions, metabolism of proteins and so forth.

Breathing retraining and grounding help to avoid or eliminate chronic inflammation and fluid in or on the lungs, and prevent common complications after thoracentesis, such as pneumothorax, pain, bleeding, bruising, or infection caused by surgeries. Therefore, breathing retraining is the natural and logical treatment of fluid in and on the lungs, which should be discussed with one’s healthcare provider.