Why Modern Man Gets Little, If Any, Benefits From Exercise 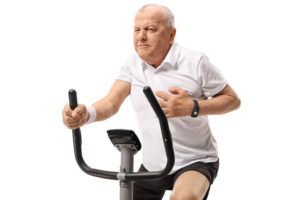 Can exercise be bad for my health? It is a common thought, which comes to our minds at times. Well, it can easily be said that the modern man or the man of this era get quite less or at times no benefits at all from exercise.

People who suffer from chronic diseases such as, cancer, asthma, heart diseases, and diabetes tend to breathe heavily from their mouths. Mostly their breathing is noisy and labored. As these people already suffer from chronic diseases low body oxygenation is common for them. Comparatively, healthy people breathe lesser and their overall oxygenation is way higher. Therefore, the key is to breathe less, as the people who breathe less have more oxygen in their tissues.

The simple CP test can help in determining the overall health levels of people. The test can be conducted easily at home holding the breath for a duration of time until it gets uncomfortable and stressful. The longer a person is able to hold his or her breath without feeling uncomfortable, the better state of health he or she is in. The guidelines to the test have also been provided and created by doctor Buteyko, by which a person can easily assess their health levels. Apart from this, doctor Buteyko has also provided using breathing techniques, which help people to increase their breath-holding times. As doctor Buteyko has stated years ago, it is essential for people to breathe using their nasal passage rather than their mouths in order to improve their health or stay healthy for long, it is necessary for people to follow this rule in today`s world as well. 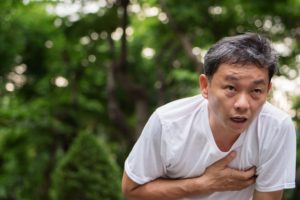 In accordance with the observations made by 200 Russian doctors who have practiced the Buteyko techniques for a long time, it has been found that physical exercise is the key factor that enables and helps the body to increase oxygenation. However, this is only done when the breathing is being done by the nose and not by the mouth. Therefore, in a way exercise can be dangerous for a person`s health if the breathing is being done from the mouth during exercise rather than the nose. Most of the health problems that are caused due to physical exercise surface as the person breathes from the mouth. The practice of breathing from the mouth during physical exercise needs to be eliminated in order to gain maximum benefits of the exercises being done. Therefore, exercise can be rewarding and helpful if done in the right way.

On 2019-04-03T06:50:33, Anonymous wrote:
Is air hunger during physical exercise important to increase CP? or can someone just breathe heavily through the nose while exercising?

On 2014-03-02T18:24:14, Anonymous wrote:
Also, can you see if there is any correlation between calcification of the pineal gland and cystic fibrosis and its genetic mutations?

On 2014-02-11T19:55:56, Artour (mod) wrote:
The toxins will be quickly eliminated the cleansing reaction), or they will make the CP low 30 or less).
Oxygen does not deal with toxins, the immune system, and organs of elimination do.

On 2014-02-10T23:29:27, Anonymous wrote:
Is it possible to have a high CP but still have a build-up of toxins? So a person has a CP of 80 or so and their veins, arteries, etc. are relaxed and dilated but somehow because of the number of toxins in the cells, blood clots, or blockages in the lymphatic system the high amount of oxygen is still unable to move the toxins properly.

On 2013-07-02T22:49:22, Joe wrote:
“Generally, patients with less than 10 s of oxygen in the body are not able to exercise at all.” I understand that you said it was a general fact, but I have (usually) around 4-8 s CP daily, and I can tolerate exercise pretty well. Also, I can nose breath for a while at a 75-80% max heart rate (although it does take discipline). I usually try to nose breath during all exercises. Am I probably just not doing the CP test right?

On 2013-05-17T00:04:11, Artour (mod) wrote:
Technically, you are correct. CO2 drive is the key factor for relatively healthy people. You can read more about this effect in the big book first part is free – https://normalbreathing.com/wp-content/uploads/2019/07/artour-normal-breathing-for-teachers.pdf), including a part which explains that O2 drive becomes stronger and even dominant when people breathe 2-4 times the norm.
However, overbreathing lowers CO2 and O2, while increasing CO2 sensitivity as well. As a result, the test works fine to evaluate ventilation and alveolar CO2 as well.
Buteyko tested thousands of people, while modern Buteyko practitioners, experienced ones, can predict with 3-5 s accuracy the CP DIY body O2 result) for a person.
It is not that hard. You can visit a hospital and watch how they breathe and do the CP test to confirm observations or test sick relatives.

Oct 2020 addition: In certain situations, the idea that arterial blood CO2 correlates with body oxygenation becomes completely wrong, for example, for people with COPD and other conditions with a ventilation-perfusion mismatch. With further development of their disease, their arteria CO2 gets above the norm, while blood and cell oxygen levels become smaller and smaller.

On 2013-05-16T23:19:39, Brian Whelan wrote:
Although there are many things I understand and agree with about the physiology of breathing and CO2/O2 balance and O2 perfusion in cells. I have a lot of difficulty with the breathing test prescribed as an indicator of health. Respiratory drive in the body is controlled primarily by high levels of CO2 and NOT low levels of O2. While too much metabolic activity at rest i.e. too much production of CO2 at rest) maybe a sign of sympathetically dominant physiology that may have health implications, it does not necessarily mean that someone who cannot hold one’s breath has low O2 saturation in cells. Again, it could mean higher baseline resting metabolism. It is not 02 that stimulates respiration but accumulation of CO2. Someone with a more sensitive CO2 brain stem reflex would do poorer on the task and not necessarily be less healthy or have less O2 perfusion. In fact, they might have increased O2 perfusion of cells considering the higher relative baseline of CO2 under normal conditions since higher CO2 increases the affinity of O2 to release from hemoglobin into cellular respiratory processes.