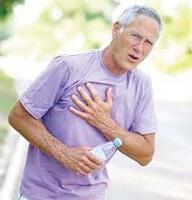 Exercise-induced asthma is defined as a type of asthma attack that is triggered by doing sports or physical activity. During such an asthma exacerbation, airways are constricted, and there is a limited flow of air to the lungs with all 3 classical signs of asthma: bronchoconstriction, inflammation of airways, and excessive production of mucus.

As a result of these factors, gas exchange between outer air and the alveoli in the lungs is limited. The person feels air hunger (of self-suffocation) and is often in a state of panic or anxiety during or immediately after running, swimming, cycling, and other forms of physical exercise.

Note that, during initial stages of asthma, CO2 levels in the blood becomes too low. This reduces brain and body oxygenation. For later stages (COPD), the lungs are damaged and brain and body O2 levels become even lower, in spite of too high arterial CO2. Even most medical doctors do not understand this simple effect.

There are 4 significant changes in the respiratory system that take place due to exercise in comparison with quiet breathing at rest. These changes are shown on the chart.

Note that normal breathing at rest is very small and slow: only 6 L/min at rest with 10-12 breaths per min for the respiratory frequency. During physical exercise, most normal people can breathe more than 100 L/min. This causes increased mechanical stress (shear stress) on airways due to movements of large volumes of air.

However, the key triggering factors of sports induced asthma relates to losses in alveolar CO2 (CO2 content in the airways). Since CO2 is a powerful relaxant of smooth muscles, mouth breathing during exercise leads to alveolar hypocapnia (CO2 deficiency) causing bronchoconstriction (see the links below for medical research in this area). Overbreathing and low CO2 are key causes of asthma.

Indeed, those medical studies that compared the effects of mouth and nose breathing found that nose breathing during exercise provides definite benefits for people with bronchial asthma during exercise with less or no bronchospasm involved (Shturman-Ellstein, 1978; Mangla & Menon, 1981 – see abstracts of these studies below). 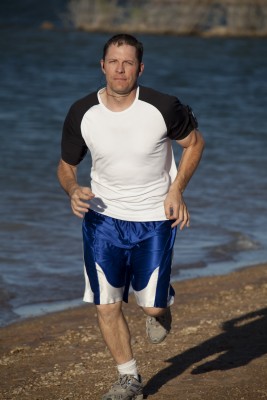 Nose breathing produces the following effects on the respiratory system during exercise:
– higher levels of CO2 in the airways causing bronchodilation and reduced heart rate
– warming of air in the sinuses and prevention of overcooling of airways
– humidification of the incoming air flow in the sinuses and prevention of drying of airways that is very important for people with asthma
– greatly reduced friction in airways due to hypercapnic bronchodilation and reduced minute ventilation
– increased levels of nasal nitric oxide absorbed in the lungs and blood
– a greater increase in body-oxygen levels after exercise (this can be checked next morning using the body-oxygen test).
– a greater training effect (larger increase in VO2max), faster adaptation to higher intensity of training, and faster recovery from injuries.

The only disadvantage of nose breathing is that relatively unfit people are usually not able to run or exercise rigorously due to their low body-oxygen content at rest caused by heavy or deep breathing. This relates to many asthmatics. Let us consider how. While normal breathing at rest is only 6 L/min for a 70-kg man, asthmatics breathe about 12-15 L/min. 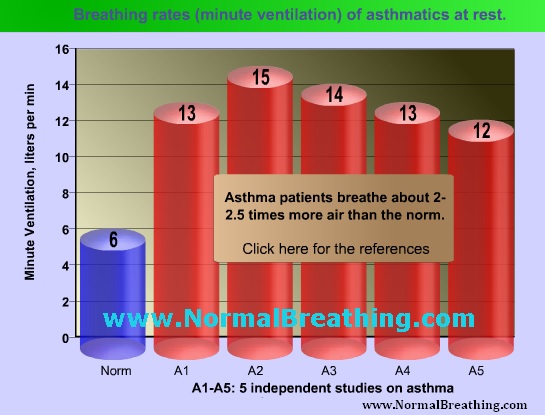 According to the clinical experience of more than 180 Russian medical doctors teaching the Buteyko breathing technique, physical exercise with nose breathing is the most natural and most effective method to increase body oxygenation and eliminate hyperventilation naturally. However, these MDs also found that most people with asthma should start with low-intensity exercise (e.g., walking or fast walking) with nose breathing only to prevent the destruction of airways during an asthma exacerbation. The patients need to increase their body-oxygen levels up to 20 seconds or more in order to exercise rigorously with nose breathing only. In most cases, this may take up to 2-3 weeks. These doctors observed complete clinical remission (with normal lung function results) or asthma cure in thousands of their patients.

Shturman-Ellstein R, Zeballos RJ, Buckley JM, Souhrada JF, The beneficial effect of nasal breathing on exercise-induced bronchoconstriction, American Review of Respiratory Diseases 1978 Jul; 118(1): 65-73.
In the first step of a study of the relation of nasal and oral breathing during moderate treadmill exercise to the onset of bronchoconstriction in young patients with perennial bronchial asthma, it was observed that most subjects spontaneously breathed with their mouths open when instructed to breathe “naturally.” Subsequently, when they were required to breathe only through the nose during the exercise, an almost complete inhibition of the postexercise bronchoconstrictive airway response was demonstrated. When instructed to breathe only through the mouth during exercise, an increased bronchoconstrictive airway response occurred, as measured by spirometry, flow-volume relationships, and body plethysmography…

Mangla PK, Menon MP, Effect of nasal and oral breathing on exercise-induced asthma, Clinical Allergy. 1981 Sep; 11(5): 433-9.
The effect of nasal as well as oral breathing during level-ground running for 6 min on the post exercise bronchial response was studied in fifteen people (five asthmatics with exercise liability, five asthmatics with no such liability and five normals). Each patient did the exercise twice; once with the nose clipped and once with the mouth closed. FEV1 was measured before exercise, immediately after exercise and at 5, 10, 15, 20 and 30 min thereafter. A fall in FEV1 of 20% or more from the basal level was taken as evidence of bronchoconstriction. When the patients were required to breath only through the nose during the exercise, the post-exercise bronchoconstrictive response was markedly reduced as compared with the response obtained by oral breathing during exercise, indicating a beneficial effect of nasal breathing. Nasal breathing was beneficial as compared with oral breathing in normals as well…

Or go back to Asthma