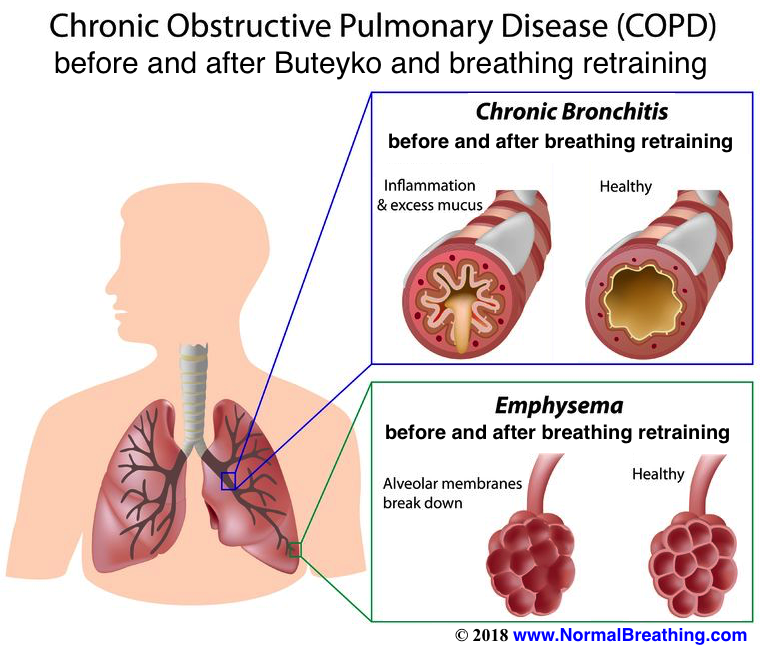 Emphysema is a pulmonary disease in which the air sacs in the lungs become stretched and damaged. It is a chronic obstructive pulmonary disease (COPD) that may lead to difficulty in breathing as well as having a chronic cough. Damaged air sacs mean a surface area which is congested for the exchange of oxygen to blood and carbon dioxide out of it. Emphysema is considered incurable by conventional medicine. However, dozens of people with severe emphysema reversed damaged caused by emphysema and completely restored their lungs using the natural treatment of breathing retraining and the Buteyko technique.

It may occur in children, but usually, it is seen in people who are chain smokers. Lung cancer also happens because of smoking. However, it is a different disease and does not have any connection with emphysema. Emphysema is an abnormal air enlargement of spaces distal to the terminal bronchioles.

Emphysema patients have a low life expectancy in comparison with others who have no such disease. The lifespan then may sometimes be only five years.

A chronic cough and short breathing are two main symptoms that are seen in emphysema patients. Emphysema is developed over many years. Sometimes emphysema is not noticed for many years because of no signs or symptoms. In the later stages of emphysema, the patients may have:

When parts of the lungs are damaged, people with emphysema accumulate more and more CO2 in their blood while oxygen levels drop. As a result, they suffer from chronic arterial hypercapnia and arterial hypoxemia (low oxygen level in blood). The video below explains how and why breathing less air improves their gas exchange in the lungs.

A primary reason that creates conditions for the body to have emphysema is chronic over-breathing or hyperventilation leading to low CO2 levels in the functioning parts of the lungs. Here are facts: 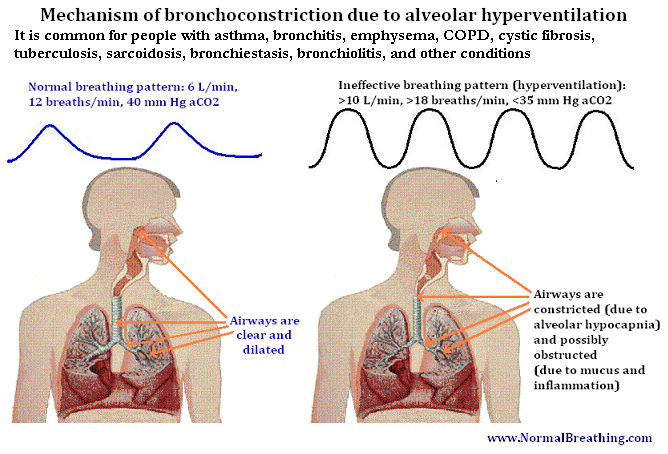 If emphysema is not treated correctly, it may lead to severe complications. Such as:

Conventional vs. natural treatments for COPD/emphysema

Breathing retraining is the most natural and complete treatment for having the lungs wholly restored. Emphysema symptoms can also be reduced by conventional treatments. A doctor finds proper treatments based on the severity of emphysema in a patient. Their treatments for emphysema may include medications, supplemental oxygen, and various therapies.

These medical therapies are concentrated on slow disease progression, preventing further complications and relief of symptoms. It includes removing damaged tissues and lung transplants. Nutrition therapies are also mentioned by doctors to those patients who have obesity and difficulty in breathing. Nutrition therapy will improve their health condition and will improve breathing especially if they choose low carb or ketogenic diet that reduces inflammation.

Natural treatment based on breathing retraining and Buteyko Method for emphysema

In this video, Dr. Artour Rakhimov explains changes inoxygen and carbon dioxide levels in the blood as a result of breathing retraining.

There will be significant improvements in a person’s health by slowing unconscious breathing patterns leading to an increase in their body-oxygen level. This occurs by practicing breathing retraining and using Buteyko’s lifestyle habits of sleep, diet, and exercise. These require lots of effort and discipline to practice continually. By achieving and maintaining a high body-oxygen level (about X seconds or more – see details below in the bonus content) 24/7, students will gradually regenerate their alveoli and later, after some months or even years of practice, will have a full restoration of the lungs as evident by X-ray reports. In other words, people will reverse emphysema lung damage and naturally treat their condition by improving their body-oxygen level. Also, the person’s ability to walk and exercise, as well as their experience of life becomes much improved.

The emphysema patients do not escape from having a chronic cough even after they quit smoking. However, once they start breathing retraining, a chronic cough usually disappears within 1 to 3 weeks. Smoking contributes to a persistent cough, and it is very desirable to stop smoking.

Chest X-rays can be used to confirm the degree of emphysema and other lung-related conditions. After confirmation eventually removing diseased cells in the lungs can result in increasing the exercise tolerance. Removing cells is done by a surgery called lung volume reduction surgery. Depending on a person’s age and state of health, surgery would not be necessary by following breathing retraining and physical exercise with strictly nasal breathing. Such exercise is a significant contributing factor to improving the body-oxygen levels. Buteyko doctors from the Moscow Buteyko Clinic had numerous patients with emphysema who, after years of practicing Buteyko reduced breathing exercises, completely reversed this disease and had normal chest X-rays showing no signs of emphysema.