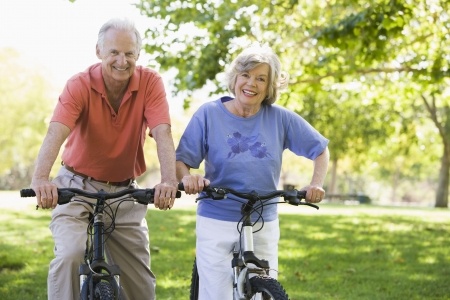 While amazing effects of the Buteyko method for ordinary people are known (see world’s best clinical results for clinical trials on cancer and asthma), would elderly Buteyko students have different effects and special needs to retrain their breathing and maintain their health later? In other words, the question is: Should Buteyko students over 60 or 70 years old (those who retrained their breathing) do anything differently in order to maintain their good health?

This question may arise when elderly Buteyko students, for example, feel that they are not able to have the same level of physical exercise as some decades ago due to their aging. Therefore, the issue here relates to reduced abilities and motivation to exercise. It is true that younger people are much more competitive, and they can easily exercise nearly 2 times more than people who are in their 70+ or older.

These observations split the original question into two others:
– 1. Do elderly people require the same amount of exercise as younger people in order to maintain similar breathing parameters (e.g., the CP)?
– 2. If not (e..g, elderly are ok with less exercise), what are the potential problems and solutions due to less exercise?

The answer to the first question is that elderly people require or are OK with significantly less exercise in comparison with people in their 20’s. For example, to maintain the same morning CP, an elderly person in 70’s often needs nearly twice less exercise than a young breathing student. Somehow, with aging, the body adjusts or adapts to getting more benefits from less exercise. This is possibly possible due to reduced metabolism in the elderly, while exercise is the main method to generate CO2 within the cells.

The Table below provides a link between physical exercise and the expected morning CP.

The source and more details are here: Benefits of physical exercise

Now we can consider the second question in more detail (potential problems due to less exercise) or which other, apart from CO2 generation, exercise benefits can be greatly reduced when a person exercises less?

The same concern rises for those groups of breathing students who cannot exercise due to various health conditions (multiple sclerosis, severe arthritis, or other types of damage to bones or ligaments). What can they do, instead of physical exercise, to achieve better health and higher morning CPs?

Soviet and Russian Buteyko MDs suggested that these groups of students (who cannot exercise) should do more breathing exercises. Practice shows that during the initial stages of learning (for up to 1-3 months), this approach usually works, and such students can achieve nearly the same results as exercising students.

The important requirement here is that, once these students are able to start exercising safely, they need to do it asap. If they fail to do that then it is common for these students, as well as elderly unable-to-exercise students, to lose some grounds (e..g, from 30+ to 20+ for their morning CPs).

Is it possible to counteract this effect and how? There are several options in this area. Two important benefits of physical activity are:

1) continuous stimulation of lung tissue due to a large amplitude or stretching during physical exercise (the tidal volume at rest or the amplitude of lung inflation-deflation is only 500-600 ml, while exercise pushes this number up to 2,000-3,000 ml)

2) physical activity for the respiratory muscles that include diaphragmatic and abdominal muscles, together with muscles that expand the rib cage.

As Dr. Buteyko suggested in his 1972 Lecture in the Moscow State University, “We need about three hours of hard work every day to perspire.” This surely also relates to the respiratory muscles and lung tissues.

But practicing Buteyko reduced breathing exercises, as a substitute for physical exercise, does not solve the above 2 problems (no mechanical stretching and nearly no exercise for the respiratory muscles and tissues).

What can be done? For these groups of students (who cannot get enough exercise), I suggest comparing the effects of different breathing exercises, such as:

2) alternate nose pranayama exercise with resistance (with long breath holds after inhales and exhales, while making exhalations as long as possible and applying resistance)

3) application of the breathing devices.

My expectation for these students is that pranayama with resistance (one can practice alternate nose pranayama breathing exercise while keeping one nostril totally blocked and another one partially blocked with 2 fingers to create more resistance so that a full active inhalation takes up to 5-15 seconds) and breathing devices will outperform Buteyko breathing exercises due to these 2 factors: maximum lung stretching and good exercise for the respiratory muscles.

Indeed, reduced breathing is based on taking smaller inhalations (or reducing tidal volume). In addition, increased CO2 dilates airways while decreasing resistance to air flow. This reduces the work for the respiratory muscles. In other words, breathing muscles get less work during and after Buteyko breathing exercises. With less or no intensive physical exercise, one can expect degenerative effects in lungs and breathing muscles of these students. Solutions?

Pranayama with resistance and breathing devices, while providing about the same levels of CO2 (and probably even higher numbers) during sessions, do not have these drawbacks. They both require large amplitudes of inhalations-exhalations and they increase work for the respiratory muscles during breathing sessions. In fact, many of my advanced breathing students sweat when they practice intensive sessions with modified breathing devices (up to 1 liter or more for the extra dead space and with additional resistance so that they require up to 7-10 or more seconds in order to make a full inhalation).

One can test and compare the effects of various breathing exercises of the same duration on themselves.

Apart from optimum breathing exercises, there are several other details that seem me important in relation to elderly people learning the Buteyko method on the West. These details will be discussed in Part 2.