About Dr. Andrey Novozhilov, MD: the Chief Physician of the Buteyko Clinic in Moscow 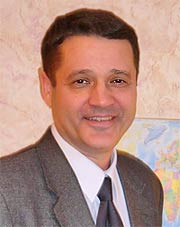 Dr. Andrey Novozhilov, MD is the Chief Physician (Medical Doctor) of the Buteyko Clinic in Moscow.

Dr. Andrey Novozhilov got acquainted with the Buteyko method at nine, when his mother twice suffered a clinical death as a result of severe attacks of bronchial asthma. Invited to consult Dr. K. P. Buteyko, MD, assessing the condition of the mother, Dr. Buteyko told Andrey how to reduce breathing to cure asthma, and the son cured the mother, who became a colleague, friend and wife of K. P. Buteyko for the next almost 40 years.

In 1987, Dr. K. P. Buteyko, L. D. Buteyko and Dr. A. E. Novozhilov opened a Buteyko Clinic in Moscow, the task of which has been to create standards for the introduction of a method of treatment in the country’s health care, which has no world analogues. The number of patients in the Buteyko clinic in Moscow reached 10 000 per year, staff – more than 100 doctors of different specialties.

His areas of work are creation of unique programs of treatment, participation in scientific and practical conferences, organization of training of Buteyko specialists in Russia, New Zealand, Great Britain, Spain, the Netherlands, USA, lecturing in leading universities and research work as the chief specialist on the Buteyko method, numerous appearances on television and radio allow us to consider Dr. A. Novozhilov as the top recognized expert not only in Russia, but also around the world.