Panic attacks are easily and consistently triggered by voluntary hyperventilation, as several studies found (Bonn & Readhead, 1984; Holt PE, Andrews, 1989; Nardi et al, 2000). This reaction to overbreathing, as these studies confirmed, is present in 95-100% of people with panic attacks.

We also know that modern people breathe about 2 times more than the medical norm established nearly 100 years ago (for charts and Tables, see the Homepage). Then it is not a surprise that panic attacks are common these days among ordinary people. Changes in diet during the last decades (eating less fat and more carbs and sugars) were other negative lifestyle changes.

If overbreathing is an effective tool to induce or cause panic attacks, can we treat panic by slowing down the automatic breathing of people back to the medical norm? Experience of Soviet leading physiologist Dr. KP Buteyko, Ph.D., and over 150 medical doctors teaching the Buteyko method suggested that breathing normalization successfully and naturally eliminates symptoms and needs for medication in people with panic disorder, with about 100% efficiency. That makes sense since carbon dioxide is a proven powerful sedative of nerve cells, while hypocapnia (low CO2 levels) increases neural excitability by reducing the threshold of excitability of nerve cells (click the link for studies).

In my clinical practice, it takes 1-8 weeks for an average person to get rid of symptoms completely. There are other alternative health techniques, such as changes in diet (to reduce inflammation in the brain) and meditation to treat panic disorder. These treatment methods can be used regardless of breathing retraining. More details are provided at the bottom of the page.

Note that there are 2 different ways to apply Buteyko breathing exercises to stop panic attacks: as an emergency remedy (for acute episodes) and as a permanent solution (using breathing retraining or changing one’s unconscious breathing patterns 24/7).

A panic attack occurs when our mind picks up a sudden stimulus that draws intense physical reactions even though in actuality there is no apparent threat to us. Panic attacks can be quite a traumatic experience for the patients. Subjects often complain about losing control. In a more intense state, people suffering from panic disorder might get the feeling of a heart attack. Throughout the course of our lives, there occur several traumatic experiences that might draw a panic attack. Those are normal and will subside with the passage of time. However, if you feel that the frequency of the symptoms has become unnatural then it might be time to consult a doctor. 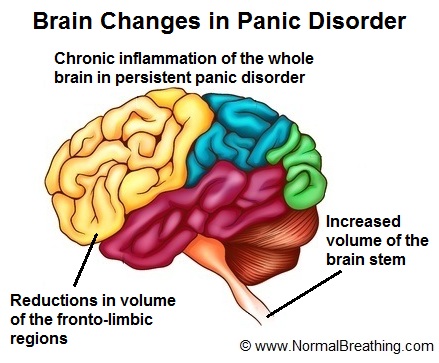 Brain imaging studies have shown that sufferers of panic disorder have changes in grey matter volume in these brain regions, reductions in the frontolimbic regions and increases in the brain stem, relative to healthy controls. The severity of these changes was also correlated with the severity of panic symptoms.

These studies have also uncovered significant volume changes in other gray matter regions including superior temporal gyrus and cerebellum in the patients with panic disorder.

Brain inflammation is suggested as one of the key factors that create treatment resistance in people with chronic or persistent panic disorder (Chen et al, 2016). Then it is logical to assume that Buteyko breathing retraining and an anti-inflammatory diet (to reduce levels of inflammatory markers) can both address panic disorder, as a combined treatment or independently.

The symptoms of a panic attack can creep up on you in a matter of minutes. Also, the timings are not fixed and you might get a panic attack even if you are surrounded by people or busy in your work. When a panic attack sets in you will immediately start having morbid thoughts about your mentality. Patients often complain that all they can think about is some impending doom.

Physically, you profuse sweating and uncontrollable shaking are also clear indicators of a panic attack. Patients might also experience chest pains that mimic those involved in a heart attack. Abdominal pains and chills might also follow. If you have been experiencing such symptoms lately then it is highly recommended that you get a proper diagnosis as soon as possible.

Psychotherapy can help root out the traumatic memories/beliefs that cause the panic attacks in the first place. Depending on the severity of the attacks, therapists might suggest medicines in conjunction with psychotherapy.

By talking about their traumatic experiences in the presence of a therapist, patients often get to understand the basis behind their fears. Once they get to know their problem, they can start taking steps to get some closure. Similarly, cognitive therapy enables the patients to face their fears in a controlled environment.

With family support and proper therapy, patients can feel the reduction in severity and frequency of the panic attacks.

However, these treatment methods have a low success rate in comparison with natural techniques such as Buteyko breathing retraining, a low carb diet, and meditation.

Benzodiazepines like Xanax can provide the patients with temporary relief by sedating the central nervous system. This can help the patients relax and overcome their sleep disorders so that their minds become more responsive to the therapeutic treatments. However, care is advised regarding the use of benzodiazepines.

Side effects of meds in panic disorder

The aforementioned drugs like Prozac and Xanax must only be taken in the prescribed amounts. Drug abuse can lead to severe complications and even death in the worst case scenario. However, even if you take the prescribed dose only there are still some side effects that you can expect.

Headaches, dizziness, sore throat, upset stomach, vomiting, and nausea are all such side effects. Usually, the severity of these side effects is mild and you can live through it. However, if you feel that things are getting out of hand then immediately consult a doctor. Remember it is better to be safe and sorry.

Breathing retraining, using the Buteyko method or breathing devices (DIY or Frolov device) work really well. In fact, if a person achieved a certain morning CP result (see the bonus content below), all symptoms of panic disappear, and chances of panic attacks are reduced to zero. The bonus content also provides you with the link to most effective meditation exercises to reduce mental chatter (voices in the head) and deal with panic naturally.

One needs to get 30 s for the morning CP test in order to be free from panic attacks. Note that the medical norm is about 40 seconds for this stress-free body oxygen test.

One of the most effective approaches to meditation is here: Meditation Resources and Products, but you will need to learn numerous things from YouTube about Joe Dispenza and his approach before you start listening and practicing his meditation audio files.

Using dietary interventions is not popular yet for panic attacks, but it is sensible to assume that using fats as a better fuel source (rather than glucose and carbohydrates) will dramatically reduce brain inflammation.

A video about that best diet for the Buteyko Method and breathing retraining: