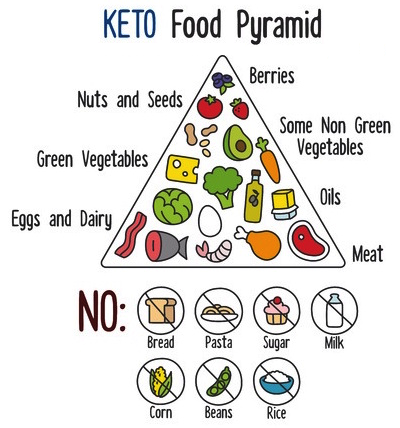 The ketogenic diet (definition) is a high-fat, low-carb, moderate-protein diet that is used with the purpose to use fats as the main energy source due to the metabolic state called “ketosis”. This diet relates to LCHF (low-carbohydrate high-fat) diets.

Keto-adaptation (definition) is a transitional period that allows the body to metabolically adapt to using fats as the main fuel for the brain, heart and other tissues of the body. It usually lasts about 2-4 weeks. Keto-adaptation can be reduced to less than 1-2 days for people with 60+ s MCP and is probably present naturally for those who have 90+ s CP 24/7.

Ketosis (definition) is a metabolic state where body cells use energy supply that comes mainly from ketone bodies in the blood rather than blood glucose. Ketosis and reliance on fats as the main energy source had been the most common physiological metabolic features during the evolution of human beings. The dramatic increase in consumption of grains became possible due to the evolvement of agriculture to its modern aggressive forms.

Who will benefit from ketosis: overweight, type 1 and 2 diabetes, cancer, leukemia, heart disease, any neurological disorder (including epilepsy, Parkinson, Alzheimer, MS or multiple sclerosis, senile dementia, schizophrenia, and depression), any digestive disorder (including IBD or Crohn’s disease and ulcerative colitis, gastritis, IBS, liver cirrhosis, and hepatitis), any respiratory problem (asthma, bronchitis, COPD, emphysema, etc.) and any other inflammatory condition – or about 90% of the overall population.

If we measure the total amount of glucose in human blood, it would be about 5-10 g or only 1-2 teaspoons. When eating an ordinary meal, a person often consumes 10-30 times more carbs than present in the blood. Since high blood sugar has toxic effects, insulin increase prevents an excessive increase in blood glucose levels by driving glucose from the blood into cells. Thus, carb-based diets require insulin secretion, while fats have a different metabolic pathway to be used as an energy source. Are there differences between these two main types of energy sources?

Physiological and metabolic benefits of ketosis

Fats vs. carbs: effects on oxidative damage and inflammation

In the other video below, Dr. Artour Rakhimov talks about the benefits of low carb diets for body/gut detoxification.

Several other studies (Beisswenger et al, 2001; Mohanty et al, 2000; Toma et al, 2009) discovered that, for diets based on carbohydrates, the degree of oxidative stress and generation of ROS (reactive oxygen species) relates to and/or was proportional to increases in blood sugar and blood insulin levels.

In simple terms, we can conclude that, in spite of decades of mass media propaganda related to the badness of fats, animal fats, and cholesterol in food, natural dietary fats are sources of cleaner fuel for the human body in comparison with carbohydrates.

While carbon dioxide and nitric oxide are known potent vasodilators, ketone bodies, as it was discovered in 1996, are also able to increase global CBF (cerebral blood flow) by 39% (Hasselbalch et al, 1996) at blood ketone levels that are common in a state of ketosis. A decade later, the same team of scientists tried to explain the mechanism of vasodilation wrote, “These observations indicate that the mechanism responsible for the increase in CBF is rather a direct effect on the cerebral endothelium than via some metabolic interactions.” (Linde et al, 2006).

When the human diet is based mainly on carbs, their presence suppresses fat metabolism and the body is unable to effectively use its own fat reserves. As a result, the blood levels of ketones for ordinary diets is very low: about 0.1-0.3 mmol/l.

Eating coconut oil or MCT oil can increase blood ketones up to 0.5 mmol/l for some hours after a meal. After days of fasting, the human organism gradually adapts to burning fats as the main energy source leading to up to 3-10 mmol/l for blood ketone levels. Similar levels for blood ketones can be achieved in ketosis due to voluntary restrictions of dietary carbohydrates.

After a transition to ketosis, the human organism relies on ketones as the main energy source for the brain and heart, as well as during mild, moderate, and even intensive exercise (for later stages of keto-adaptation). 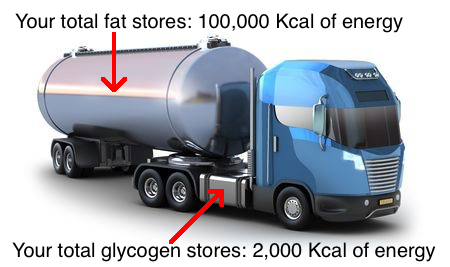 Since carbs suppress access to using body fats, ketosis allows a person to achieve direct access to his/her main energy resource 24/7. Thus, while an ordinary person has only about 2,000 kcal stored as glycogen, the fat reserves are about 50 times larger or around 100,000 kcal for an adult male. whole-body glycogen stores last only for about 2 hours of maximum intensity exercise (or 1 day), with ketosis, one is linked to his/her main energy supply.

To which energy store would you like to stay connected? To answer this question, let us look at the advantages of ketosis.

Breathing and lifestyle benefits of ketosis

Ketosis, even for people with 15-25 s CP, means freedom to plan and do breathing sessions and physical exercises whenever they want or as the top priorities while meals can be skipped or moved to other parts of the day.

For example, with around 15-25 s for the morning CP, most people have only about 1-1.5 hours before they need to eat breakfast after they wake up in the morning. This often implies hard choices between breathing sessions and physical exercise that are to be done before breakfast. Trying to skip or postpone the breakfast commonly causes symptoms of light or mild hypoglycemia (low energy, grumpiness, loss of concentration, etc.). Some people can experience more serious hypoglycemia with less than 3.0 mmol/L (60 mg/dL) for blood glucose levels often causing sweating, palpitations, and headache for the rest of the day. Similar effects take place when one tries to skip or postpone a lunch or supper. In other words, a person eating large amounts of carbs needs to plan his or her day around meals (i.e., meals play the central role in one’s daily schedule). This is because the diet that is metabolically based on carbohydrates generally requires regular eating due to very limited stores of carbs in the human body and inability of the human body to quickly switch to using body fats as the main energy source.

True ketosis (over 1, preferably over 2 or 3 mmol/l for blood ketone levels) makes skipping breakfast and other meals easy. Note that, when someone has 60+ for the morning CP, it is relatively easy to skip a meal without any dramatic effects. Ketosis allows similar skipping of the meal at much lower CP values (down to 10-20 s MCP).

It is noticed that keto diets while providing the same amounts of calories and proteins, reduce the total time that is required for digestion per day. Therefore, a breathing student in ketosis is going to have more time for practicing breathing exercises and doing physical activity.

A smaller CP drop after meals

Keto or low carb diets cause a smaller drop in the CP in comparison with ordinary (high carb) diets. This increases average CP value providing easier breathing and better next morning CP.

More stable mood and better thermoregulation throughout the day

Fluctuations in blood glucose levels, when having high carb diets, cause fluctuations in mental states, mental clarity, feeling of energy, and other mental, psychological, and neurological parameters. Ketosis removes these fluctuations allowing a more stable mood throughout the day. In other words, feeling high and low depending on blood sugar and meals are common for high carb diets. Keto-adaptation gradually smooths or level out these changes.

A similar effect relates to thermoregulation. Did you notice that for slower breathing and feeling slightly cold (as it is required at 20+ s CP), makes a breathing student adjust his/her clothing and/or surrounding temperature many times per day? Before meals, most people on carb diets feel colder. After meals, feeling warmer is also common. Ketosis flattens these fluctuations as well.

All these beneficial effects of ketosis allow breathing students to progress faster and reduce their symptoms/medication sooner in comparison with ordinary high-carb or medium-carb diets.

Even when stuck with the CP progress, the beneficial effects of ketosis include fewer symptoms for nearly all common conditions, more energy, better mood, focus, concentration, fitness, and other types of performance.

How do I know that I am in ketosis?

Relatively healthy people can make a transition to ketosis without devices, but for those who are sick, it is surely better and safer to get a blood ketometer to monitor your blood ketones and blood glucose levels as well. Currently (2018) the best ketometer on the market (to follow your changes in blood ketones and glucose) is KETO-MOJO Blood Ketone and Glucose Testing Meter Kit, Monitor Your ketogenic Diet, 1 Lancet Device, 10 Lancets, 10 Ketone Test.

Blood ketone strips were quite expensive just 2-4 years ago, at about 4-5 USD per test. But due to the huge popularity of low carb diets, it is now at about 1 USD per one blood ketone measurement: KETO-MOJO 50 Blood Ketone Test Strips.

Your blood ketone levels in ketosis are from 1 up to 4-5 mmol/l. If you do not measure blood ketones, there are other criteria of ketosis that do not require equipment to measure something. These criteria are provided right below here as your bonus content. The bonus content also lists some crucial supplements and personal tips that will help you to make the transition to ketosis or keto-adaptation easier.

As explained above, in ketosis, you can easily skip breakfast and have enough energy for breathing and physical exercise.

These supplements and tips will help to make a transition to ketosis easier:
– use about 5-10 g of bacon or bacon fat to prevent or stop excessive food cravings (these mini snacks dramatically reduce hunger for overweight people)
– use 1/2-1 teaspoon of sea salt every day with warm water
– use one multivitamin-multimineral tablet supplement (such as Centrum)
– use magnesium at 400-500 mg per day in 2-3 doses.

The original idea to combine therapeutic ketosis with breathing retraining was suggested by Buteyko breathing teacher Misha Sakharoff, Denmark (sakharoff.com). This is possibly the most effective single addition and contribution to the Buteyko method and breathing retraining during the last few years.

Avoid keto flu symptoms (no misery) and adapt to ketosis in hours (not 2-3 weeks!) with breathing retraining

Here is a video where Dr. Artour explains fast keto-adaptation.

Resources about keto diet and ketosis

Professor Jeff Volek, Ph.D., RD, teaches and leads a research team at The Ohio State University: The Many Facets of Keto-Adaptation: Health, Performance, and Beyond

Go back to Learn Buteyko