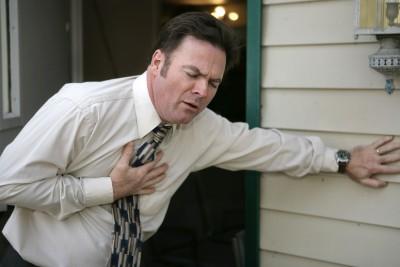 Offical Western medical sources offer an amazingly nonsensical perspective on breathing COPD Exercises patients and cannot even explain what is wrong with breathing in people with asthma, bronchitis, and emphysema. As a result, traditional or official breathing exercises (like pursed lip breathing) for COPD provide very limitedly, if any, effects.

In contrast to this approach, reduced breathing exercises of the Buteyko breathing technique or the Frolov breathing device (Samozdrav and DIY devices are as good) allow them to experience nearly immediate positive effects:
– Blood oxygenation increases even after a 20-30 min single breathing session
– In 3-7 days, nearly all COPD patients can walk about twice longer distance (and duration of time) without breathlessness (dyspnea) and with strictly nasal breathing
– Nearly immediate improvements in sleep, clarity of mind, energy levels, and other lifestyle factors.

In this YouTube video interview, Dr. Artour Rakhimov explains how people with COPD improve their lung function and blood oxygen saturation just after one breathing session with normal blood values after months or years of breathing retraining.

With time, those people with COPD who managed to normalize their breathing back to the medical norm can achieve normal lung function test results with 97-99 for blood oxygen numbers. This is a difficult challenge, however, and often requires months or years of effort. Why and how does this treatment therapy for COPD work?

It is known that acute COPD exacerbations are accompanied by increased lung ventilation: breathing becomes faster and usually deeper. This causes losses in alveolar CO2 and constriction of airways. Studies also show that, when COPD patients are in a stable condition, they also exhibit constant heavy breathing at rest.

Increased ventilation reduces alveolar CO2, a powerful bronchodilator (see links below). Continued over-breathing further reduces CO2 levels in airways causing bronchospasm, increased the friction of air moving in constricted airways, extra mucus production (that further worsens air movement), increased hypoxemia, and reduced oxygen levels in cells. Furthermore, studies have found injurious effects of alveolar hypocapnia (low CO2 in the lungs) (see links below.) Therefore, it is not a surprise that severity of acute COPD exacerbations can be greatly reduced if the patients slow down their breathing and accumulate CO2 in airways in order to expand them using special COPD breathing exercises. This can be accomplished with Buteyko reduced breathing exercises or when using the Frolov-Breathslim device (or the DIY device). An introduction to Buteyko exercises and accompanying lifestyle changes can be found in the Section “Learn here”.

A better option of the COPD respiratory exercise is to increase alveolar CO2 using a breathing device such as the Frolov breathing device (instead of Buteyko exercises). Over 500 medical doctors endorse and use the Frolov breathing device in Russia. After testing hundreds of people with COPD, Russian Buteyko MDs suggested that COPD patients require more than 20 seconds for the body-oxygen test in order to prevent acute COPD exacerbations and improve their fitness and symptoms. However, if people with COPD get more than 40 seconds they can achieve clinical remission with normal lung function results. COPD patients need to slow down their heavy breathing back to the medical norm using both breathing exercises and lifestyle changes.

The link below describes a clinical trial which evaluated the effects and safety of breathing exercises with the Frolov breathing device on respiratory function of COPD patients with a moderate degree of the disease who were hospitalized following an exacerbation.

In this clinical trial, breathing exercises for COPD patients were continued after their discharge from the hospital. The therapy, breathing with the Frolov device from 10 minutes up to 30 minutes per day (maximum), was used in addition to standard medication. Final measurements (lung function tests) were done after 90 days of respiratory exercises. Here is a partial translation of this medical study: acute COPD treatment. This COPD Exercises trial relates to the Section of the website that has pages devoted to breathing exercises with the Frolov respiratory device. Both lung function results and blood oxygenation (as oximeters show) become normal when they achieve over 60 s for the morning CP.