The graph on the left represents normal carbon dioxide transport and normal oxygen transport, while the figure on the right side represents the most common clinical situation in the sick. It explains the mechanism of cell hypoxia due to hyperventilation with changes in arterial and venous blood gases and the oxygen and carbon dioxide partial pressure in cells. 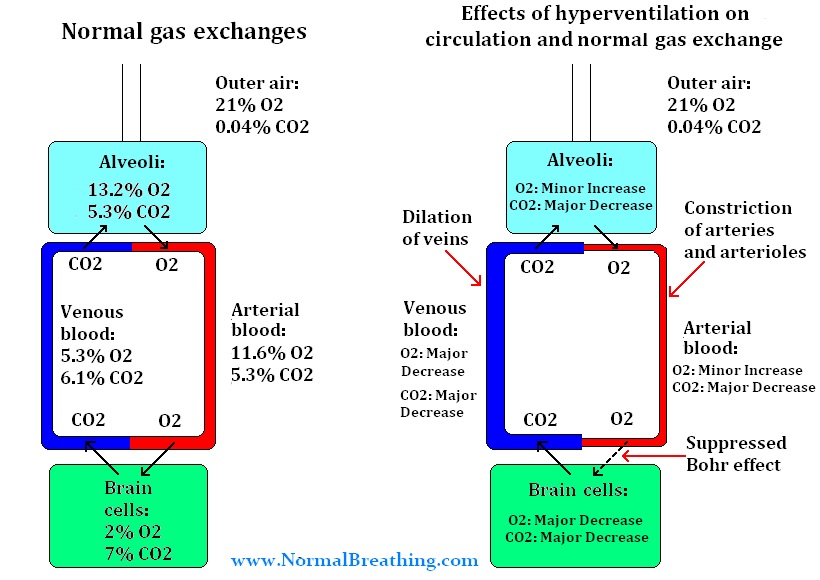 Since hypocapnia (carbon dioxide deficiency) causes constriction of arteries and arterioles and the suppressed Bohr effect, overbreathing (breathing more than the medical norm) reduces O2 tension in the cells of the brain, heart, kidneys, liver, and other vital organs.

Effects of hypocapnia on O2 and CO2 transport

Hence, the effects of chronic hyperventilation on oxygen transport are due to:
– constriction of blood vessels: arteries and arterioles (less blood and oxygen is delivered to cells and tissues)
– the inefficient Bohr effect (less oxygen is released in cells and tissues).

Note that the real-life situation in the sick people (see the Homepage for exact numbers) can be worse due to increased chest breathing. As we discussed before, during chronic hyperventilation, most people switch from diaphragmatic to chest breathing. Chest breathing reduces oxygenation of the arterial blood due to lowered oxygen supply for lower divisions of the lungs. In the meantime, the diaphragm is also deprived of CO2 and O2. This leads to spasm and chronic fatigue in the diaphragm when a more significant portion of air is inhaled using the coastal (or chest) muscles.

Finally, since lower divisions of the lungs get a greater supply of the blood (due to gravity), this chest breathing effect is amplified, and the oxygenation of the arterial blood is further diminished.

Therefore, there are three independent mechanisms of hypocapnia or carbon dioxide deficiency that hampers the efficiency of oxygen transport: chest breathing, vasoconstriction, and the suppressed Bohr effect.

Go back to CO2 Benefits