Bohr effect (medical or scientific explanation is down below)

The Bohr effect explains the cell’s oxygen release or why red blood cells unload oxygen in tissues, while carbon dioxide (CO2) is the key player in O2 transport due to vasodilation and the Bohr law. The Bohr law was first described in 1904 by the Danish physiologist Christian Bohr (father of famous physicist Niels Bohr).

What is the Bohr effect in simple terms (for dummies)?

The Bohr effect is a normal process in healthy people since healthy people have normal breathing at rest and normal arterial CO2 levels. How does the Bohr law work? As we know, oxygen is transported in the blood by hemoglobin in red blood cells (called “erythrocytes”). How do these red blood cells know where to release more oxygen and where less? Or why do they unload more oxygen at all? Why is O2 released in tissues? The red blood cells sense higher concentrations of CO2 in tissues and release oxygen in such places.

Bohr effect summary. More oxygen is released in those tissues that have higher absolute and/or relative CO2 values. Note that this is true for healthy people who have normal breathing patterns.

Can people with chronic diseases enjoy the normal Bohr effect and normal oxygen delivery to the brain, heart and all other vital organs? Consider these medical studies.

Note that advanced stages of some conditions (e.g., asthma and CF) can lead to lung destruction,
ventilation-perfusion mismatch and arterial hypercapnia, causing a further reduction in body oxygen levels.

Overbreathing or hyperventilation in the sick causes hypocapnia or reduced CO2 tension in the lungs and arterial blood (since ventilation-perfusion mismatch is not a common finding in the sick). This leads to hampered oxygen release and reduced cell oxygen tension due to the suppressed Bohr effect (Aarnoudse et al., 1981; Monday & Ttreault, 1980; Gottstein et al., 1976). 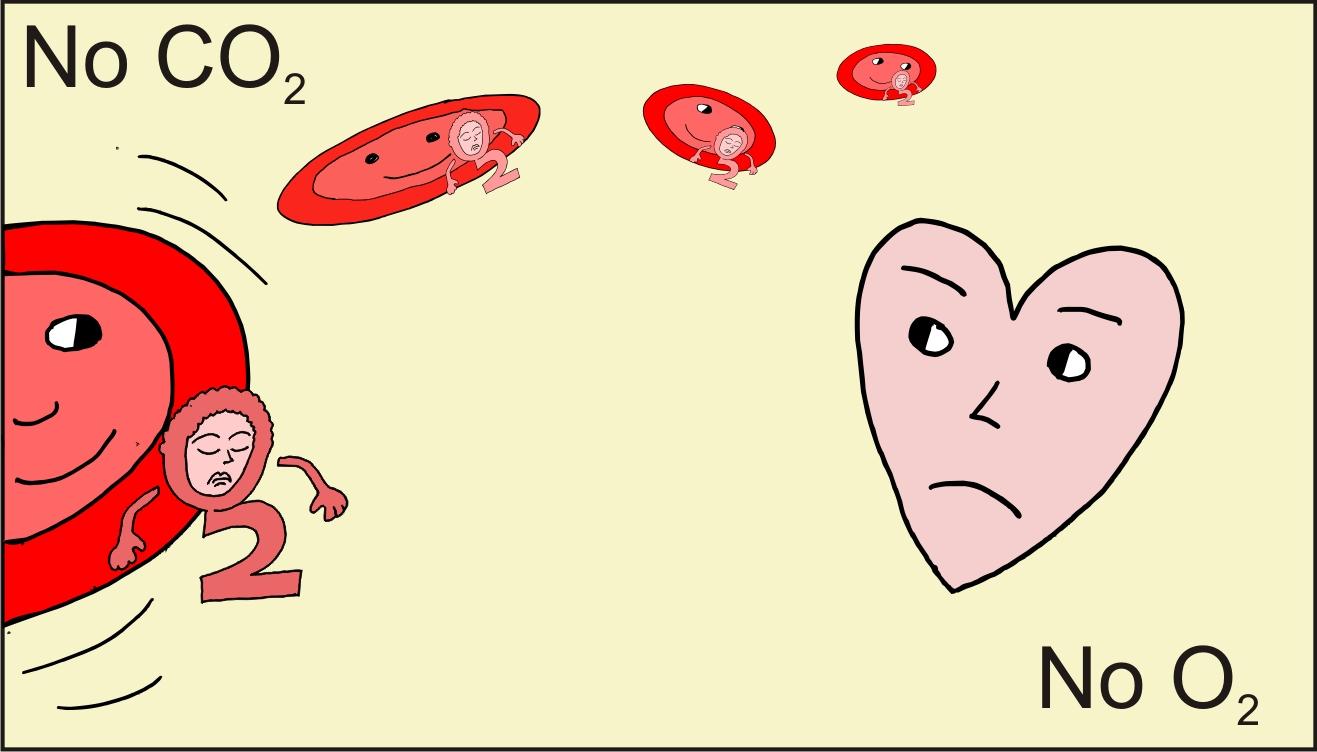 Hence, for the suppressed Bohr effect, the absolute CO2 concentration is low (see the picture of the right side), and O2 molecules are stuck with red blood cells. (Scientists call this effect “increased oxygen affinity to hemoglobin”). Hence, CO2 deficiency (hypocapnia) leads to hypoxia or decreased cell-oxygen levels (the suppressed Bohr effect). The more we breathe at rest, the less the amount of available oxygen in the cells of vital organs, like the brain, heart, liver, kidneys, etc.

Many people believe that breathing more air increases oxygen content in cells. This is not true. Generally, breathing more even reduces oxygen content even in the arterial blood. Indeed, hemoglobin in red blood cells, in healthy blood for very small normal breathing, are about 98% saturated with oxygen. When we hyperventilate this number is about the same (in real life it gets less since most people make a transition to automatic costal or chest breathing that reduces arterial blood O2 levels), but without CO2 and the Bohr effect, this oxygen is tightly bound with red blood cells and cannot get into the tissues in required amounts. Hence, now we know one of the causes of why heavy breathing reduces the cell-oxygen level of all vital organs.

The Bohr effect is crucial for our survival. Why? During each moment of our lives, some organs and tissues work harder and produce more CO2. These additional CO2 concentrations are sensed by the hemoglobin in red blood cells and cause them to release more O2 in those places where it is most required. This is a smart self-regulating mechanism for efficient cells oxygen transport. 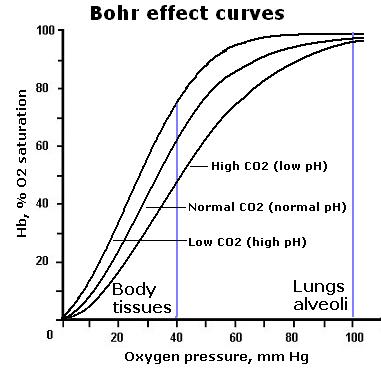 Christian Bohr stated that at lower pH (more acidic environment, e.g., in tissues), hemoglobin would bind to oxygen with less affinity. Since carbon dioxide is in direct equilibrium with the concentration of protons in the blood, increasing blood carbon dioxide content, according to the Bohr effect, causes a decrease in pH, which leads to a reduction in affinity for oxygen by hemoglobin (and easier oxygen release in capillaries or tissues). 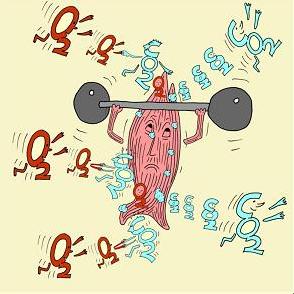 For example, without the Bohr effect, we could not walk or run for even 3-5 minutes. Why? In normal conditions, due to the Bohr effect, more oxygen is released in those muscles, which generate more CO2. Hence, these muscles can continue to work at the same high rate.

However, sick people have reduced CO2 blood values. Hence, they are likely to experience symptoms of chronic fatigue, and poor results for physical fitness tests due to tissue hypoxia (low cell-oxygen levels).

Professor Henderson about the Bohr effect

This is what Professor Henderson from Yale University wrote about the Bohr effect,

“But even as early as 1885, Miescher (Swiss physiologist) inspired by the insight of genius wrote: “Over the O2 supply of the body, CO2 spreads its protecting wings” Yandell Henderson (1873-1944), in Henderson Y, Carbon dioxide, in Cyclopedia of Medicine, ed. by H.H. Young, Philadelphia, FA Davis, 1940.

Here is a YouTube video that considers the Bohr effect and explains the mechanism of why overbreathing decreases the cell-oxygen level.

It is however known that dozens of these studies that measured the Bohr effect were done in vitro. It is still not clear if hyperventilation and arterial hypocapnia (low CO2) indeed cause reduced oxygen transport due to one tricky effect that I explain in the bonus content right below here.

Oxygen transport in living creatures is more likely to depend on Vasodilation (expansion of arteries and arterioles due to higher CO2 values) rather than on the Bohr effect. The problem with the Bohr effect is that, when people hyperventilate, they do reduce CO2, but this also slows down blood flow (circulation). As a result, due to slower blood flow, tissues accumulate more CO2, and venous CO2 remains high in people who suffer from overbreathing. Hence, the real value of the Bohr effect is not as high as generally thought, while vasodilation still reduces O2 and blood supply to all cells.

Böning D, Schwiegart U, Tibes U, Hemmer B, Influences of exercise and endurance training on the oxygen dissociation curve of blood under in vivo and in vitro conditions, Eur J Appl Physiol Occup Physiol. 1975; 34(1): p. 1-10.