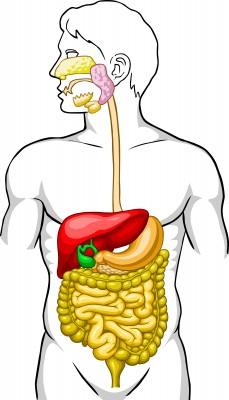 The superficial causes of shortness of breathing after eating meals are numerous: Candida yeast infection, fats in the diet (if you are overweight), simple overeating, and so forth. But what about the physiological causes? They relate to changes in automatic breathing that most people may not even notice.

The digestive system is a sophisticated conveyor more complicated than any modern chemical factory. It has its own brain (the enteric nervous system), various organs, special chemical messengers for communication, and hundreds of digestive enzymes. When we are hungry, the system is ready to accept and process food. Eating without real hunger results in biochemical stress for some organs and the whole system in general. (According to a recent survey “Americans and Overeating”, over 60% of American women eat or have a snack when they feel stressed.)

What are the effects on breathing? Stress for the GI system, requirements in digestive

enzymes and the need to store new chemical substances from the food in body cells, all these factors lead to hyperventilation causing shortness of breath after eating. You can easily notice the negative effect of overeating on your breathing when you exercise.

Hence, the immediate effect of overeating is hyperventilation. What is next? Overbreathing causes low CO2 content in alveoli and arterial blood leading to reduced body-oxygen levels. Hence, overeating promotes any chronic disease or health pathology. 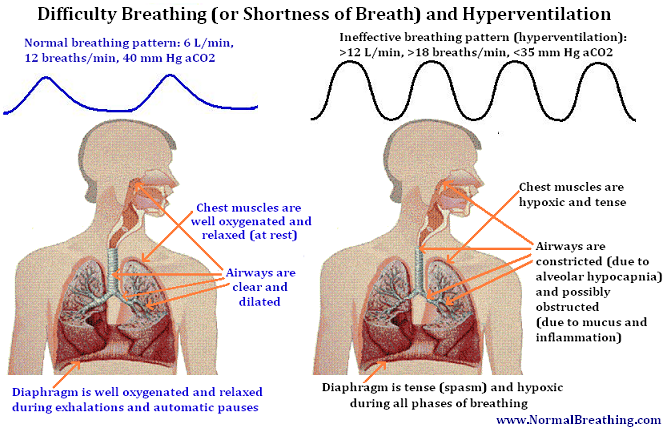 Hyperventilation also reduces the oxygen content in the brain. This can cause many mental illnesses and disrupt the work of neurotransmitters and the state of the nervous system due to another factor. CO2 is a stabilizer of the nervous system or homemade sedative and tranquilizer. Apart from psychological and neuronal effects, overbreathing will worsen heart or cardiovascular disease, diabetes, cancer, arthritis, and any other chronic condition.

When hyperventilation is accompanied by overeating, the pancreas experiences especially severe forms of stress. Overbreathing reduces blood supply and oxygenation of the pancreas, while overeating intensifies the demands in the digestive enzymes to process extra-food substances. The final outcome is pre-diabetes, where health will be further compromised by reduced insulin efficiency caused by hypocapnia with noticeable shortness of breath. 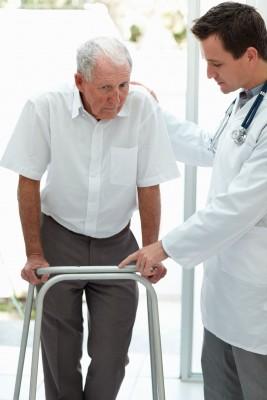 The amplitude of these negative changes is proportional to the caloric value and type of meal eaten. Therefore, with larger meals, especially ones with fats and proteins, these effects are more significant. As Doctor Buteyko suggested, when digested substances are in the blood, they are to be used or metabolized by body cells. This cellular consumption means “inner breathing”. Thus, the respiration of cells (this term is normally used by certain microbiologists), especially in case of overeating, is intensified. That causes increased ventilation in the human organism (Buteyko, 1977). Overeating, according to Doctor Buteyko, has the worst possible consequences for respiration leading to shortness of breath after eating.

Doctor Buteyko also found that meals rich in proteins (especially when they are quick absorbing animal proteins) and, to a lesser degree, fats considerably intensify breathing, while fresh fruits and vegetables produce the least impact on ventilation. Why? One reason is due to the varying availability of digestive enzymes. Fresh fruits, for example, often have their own enzymes for self-digestion making their digestion easier. Cooked meats and fats are hard to digest. Second, the amino acids cause blood acidification. Therefore, the CO2 removal (or overbreathing) is required to restore the blood’s normal pH. Third, some essential amino acids can directly affect the breathing center and intensify respiration.

An old study by Haselbalch (1912) revealed that after following a vegetarian meal, aCO2 decreased to 43.3 mm Hg (the initial value was about 45 mm Hg); while a meal with meat resulted in 38.9 mm Hg. Such a difference means that the CP test results after a meat meal can be about 12 s less, than after a vegetarian one. Explaining this finding in his textbook on respiration, Professor Haldane suggested, that “a meat diet, which causes an increase of sulphuric and phosphoric acids in the blood, is acid-forming as compared to a vegetable diet, which contains less protein and relative abundance of salts yielding carbonates”(p.183, Haldane, 1922).

Hence, animal proteins produce an even worse effect on shortness of breath after eating. However, it not advisable for all people with less than 20 s for the body-oxygen test to become vegetarians. Low body-oxygen content is also accompanied by ineffective protein metabolism and increased requirements in dietary proteins. 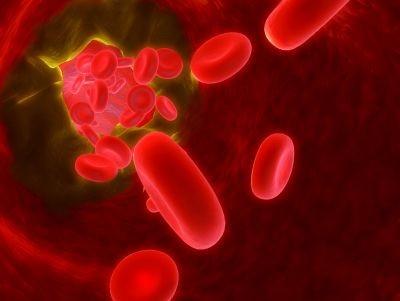 Thus, the breathing center compensates for the additional acids (amino acids) in the blood and the resulting blood acidification (low pH of the blood) by reducing carbonic acid and CO2 stores. While with the vegetarian meal, the presence of additional alkaline salts in the blood requires extra acids for blood pH preservation. Of all acids in the blood, carbonic acid is the main component and its concentration can be changed by respiration.

These ideas provide some explanation why alkaline diets are considered to be healthy in the management of various health problems (fruits and vegetables yield alkaline residues in the blood when they are consumed), while acidic diets (that include meats, fish, eggs, dairy products, most grains, legumes, and nuts) less so.

In addition to the immediate effects on respiration, a lack of normally occurring food substances in the diet such as vitamins and minerals can gradually cause chronic hyperventilation. For example, carbohydrates require for their digestion adequate amounts of B vitamins. These vitamins are naturally present in cereals, whole grains, and root vegetables, but almost absent in sugar, white bread and white rice. Thus, eating these refined products diminishes the B vitamin content in nervous cells gradually leading to chronic hyperventilation (Buteyko, 1977). Doctor Buteyko and his colleagues particularly emphasized the dangers of sugar and refined products. The lack of some minerals (especially Mg, Zn, and Ca) or their biochemical unavailability is another cause of chronic Shortness of Breath.

Therefore, the typical western diets, which are often full of refined products and lack fresh fruits and vegetables, have negative effects on breathing. Most of all, overeating, so prevalent nowadays, is one of the major causes of chronic hyperventilation.

What causes overeating and shortness of breath after eating?

According to research and observations of more than 150 Russian doctors on Shortness of Breath, when our breathing gets heavier and alveolar CO2 concentrations decrease, less glucose is delivered to cells. This makes sense since overbreathing reduces circulation or blood flow. In order to improve glucose transport, the body rises glucose blood levels. But then another mechanism drives glucose from the blood into fat cells.

Since hyperventilation is present in over 90% of normal people (as evidenced by 24 medical publications) most modern people should gradually accumulate extra-weight. This is exactly what we see in real life. Shortness of breath after eating is a common sign of overeating.

Conclusions. On a physiological level, an ineffective breathing pattern (overbreathing) makes people experience compulsive overeating, stuffing, food addiction, obesity and weight gain. All these abnormalities are possible only in conditions of overbreathing with shortness of breath after eating as one of the symptoms.

Hence, if one wants to know how to stop overeating, he can change the way he breathes. When we breathe more, we tend to eat more. Eating more, on the other hand, is the stress for the organs of digestion, as discussed above. Therefore, breathing becomes heavier at the end of the digestive process. The solution to this vicious circle is breathing retraining with the goal to slow down automatic (or unconscious) breathing.

The solution for shortness of breath after eating

about 25-30 seconds. This means that they need to slow down their automatic breathing and get more oxygen in body cells. How? Open the Homepage to see over 100 medical studies compressed into 2 images and one table.

Or go to Causes of Hyperventilation