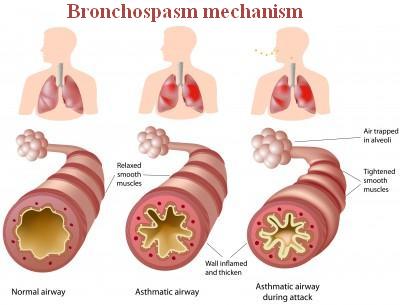 Bronchospasm (definition) is defined as constriction of bronchi and bronchioles. It can generally happen due to 3 factors:
– a spasm in the smooth muscles of bronchi and bronchioles
– an inflammation of the airways
– excessive production of sputum (mucus) due to an allergic reaction or possible irritation caused by mechanical friction of air (due to shear stress), overcooling or drying of airways (i.e., during exercise-induced asthma).

Bronchospasm is a normal physiological reaction to alveolar hyperventilation (Badier et al, 1998; Clarke et al, 1982; Jamison et al, 1987; O’Cain et al, 1979; Sterling, 1968), as you can see from the titles of these articles (see below). Do people with bronchitis, asthma, and other conditions suffer from alveolar hypocapnia (CO2 deficiency in airways)? What is known about minute ventilation in people with bronchospasm?

Bronchospasm can be induced by many chemicals that can cause either bronchospasm or bronchodilation, but CO2 plays the key role due to two factors: its vasodilatory potency (see links with medical studies below) and additional negative effects caused by alveolar hypocapnia (lack of CO2), as the Table above proves.

What else influences bronchospasm?

Chronic hyperventilation (breathing more air than the medical norm) also leads to cell hypoxia and immunosuppression regardless of ventilation-perfusion ratio and arterial CO2 levels (it can get too high for many lung pathologies). As a result of alveolar hyperventilation, there are additional effects, such as 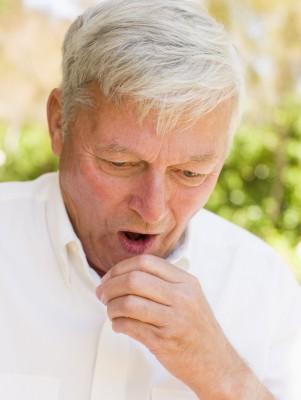 frequent respiratory infections, excessive production of sputum (mucus) and chronic inflammation. Allergic triggers (dust, pollen, and many others) cause additional problems due to the hypersensitive immune system caused by systemic body hypoxia. All these factors narrow airways and worsen their conductivity, triggering bronchospasm.

Bronchospasm mechanism follows from the above Table, which shows that these groups of people are heavy breathers. They all have low CO2 levels in their lungs. As a result of low alveolar CO2, they also have low body-oxygen levels due to effects of alveolar hypocapnia, which either destroys lungs (causing arterial hypercapnia and hypoxemia as for people with COPD) or causes arterial hypocapnia with reduced oxygen transport, as an additional factor that is present during bronchospasm. 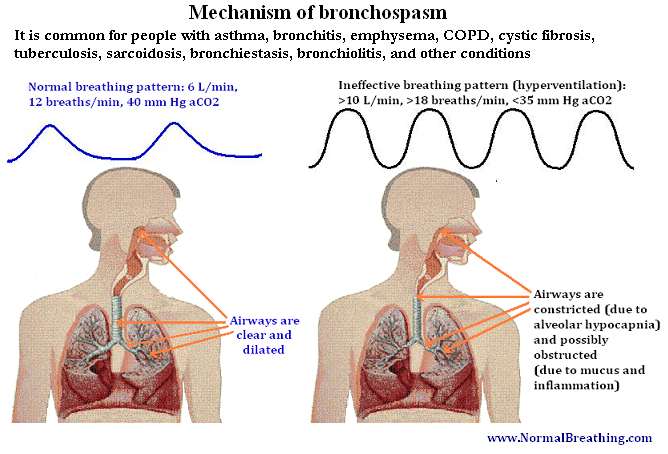 therefore, due to its effects on oxygen transport, leads to low oxygen levels in tissues and favors chronic inflammation (see links below). As a result, people with lung conditions (asthma, bronchitis, bronchiectasis, bronchiolitis, cystic fibrosis, tuberculosis, sarcoidosis, and many others), experience chronic bronchospasm in the smooth muscles of airways due to chronic alveolar hypocapnia.

Surgery of the throat or anesthesia can also be among some rare causes.

it can be successfully treated, as over 180 Russian medical doctors, found. The effective way to deal with Bronchospasm is the Buteyko breathing medical therapy that is approved by the Russian Ministry of Health.

It has been applied to more than 200,000 people with health problems (such as asthma, bronchiectasis, bronchiolitis, bronchitis, COPD, and many others) that involve bronchospasm.

Bronchospasm cure (clinical remission), according to these Russian medical doctors, as well as my experience with 100s of my breathing students, has simple criterion and goals for a person to achieve.

* The upper left illustration is by Victor Lunn-Rockliffe