Treat Acne Naturally And Easy with Buteyko and Breathing Retraining

The effects of natural treatment of acne with breathing retraining are amazing since all our students who slowed down their automatic breathing and improved body oxygenation (measured in seconds) completely cleared their skin from any signs of inflammation. But before going into details of this natural treatment (that also clears a brain from pollution due to better blood flow – see the image on the right), let us review the basics related to acne.

Acne is a skin condition that causes spots, pimples, and inflammation on the body due to the supressed immune system, reduced blood flow and reduced body-oxygenation caused by chronic over-breathing. How can you cure acne due to hormonal imbalance? Thousands of Buteyko breathing students got rid of their acne naturally as a side effect of breathing retraining since they usually choose the Buteyko technique to deal with asthma, COPD, diabetes, and other chronic diseases. This is one of the best natural home remedies for acne, oily skin, and acne scars. It does not require you to apply any home remedies overnight. The inflammation of acne commonly occurs on the face, back, chest, upper arms, and shoulders. Other forms of acne include blackheads, cysts, and whiteheads. Acne is the most common skin condition in the United States where about 50 million Americans suffer from it every year, most commonly in those between the ages of 12-28. This is because over 97% of people suffer from hyperventilation (see the homepage for details). Acne is also prevalent during puberty, a time when the sebaceous glands are highly activate, however it can occur at any age. Acne is not lethal, although if neglected can result in the scarring of skin. 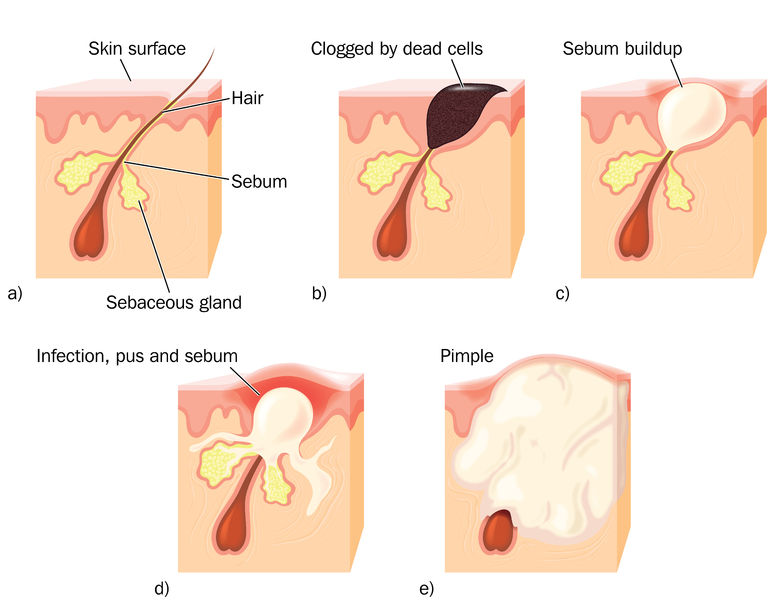 Acne is formed when a follicle, a tube like passageway gets blocked, and a build up of oil, hair, and skin cells gather in the follicle. Normally, male hormones stimulate glands beneath the skin to secrete an oily lubrication called sebum, which carries dead skin cells via a follicle to the skin’s surface as waste. When, however, there is an over production of male hormones by the adrenal glands, the oil glands will be over stimulated and secrete an excess of the sebum oil. When this happens, a blockage of sebum, skin cells, and hair in the follicle can occur, and can then get infected by bacteria that live on the skin called propionbacterium, resulting in a pimple.

When looking for the cause of acne, over-breathing is the central factor and the result is a weakened immune system. Improving your body-oxygen level is a home remedy that works for many people without requiring additional medications. Secondary factors that influence one’s androgen hormone levels and see if there is an imbalance. Puberty for instance, is a time when the androgen hormone is in an overabundance, and so the glands beneath the skin secrete excess sebum. Other factors that increase androgen hormones are some medications that contain androgen and lithium, greasy cosmetics, plain, and simple hormonal changes such as puberty, emotional stress, and menstruation.

The treatment of acne and our main home remedy is to slow down automatic breathing patterns. This requires self-discipline and persistence from students since breathing exercises and physical exercises need 2 hours of daily practice or more. For mild cases of acne, over-the-counter medications like soaps, overnight lotions, creams, possible home remedies, and lotions are used by most people. Some of these over the counter medications are made with chemical ingredients which is supposed to help to get rid of the acne in different ways (but usually not completely). Resocinol, for example, is supposed to get rid of blackheads and whiteheads. Benzoyl peroxide should destroy bacteria cells, replace skin cells, and slow down the production of sebum. Salicylic acid is designed to get rid of blackheads and whiteheads, and also reduce any inflamed or swollen areas. Retin-A is invented to unblock clogged pores. Azelaic acid may make follicle cells stronger as to avoid sebum ruptures. There are many remedies for mild acne conditions, so choosing the one that best fits an acne condition is advised. For example if a patient has swelling on his face, a reduced swelling medication such as salicylic acid would be good. Also, it is recommended to start with lower strength medications, as some of the stronger more acidic ones may cause complications such as burned or reddened skin. However, breathing retraining and improved body-oxygenation allow to naturally reverse acne fast and effectively – much better than any medications or creams because your skin craves for more oxygen, better blood supply, and improved immunity.

When treating more moderate to severe acne, stronger prescription gels, ointments, and antibiotics are commonly used by most people, but again with partial success only. Antibiotics lower the amount of P. Acnes bacteria which is the main cause of acne in the first place. Two commonly used antibiotics are called Erythromycin and Tetracycline. Another method to reducing acne in women is to take oral contraceptives because oral contraceptives will suppress the overactive sebum-secreting gland. However, antibiotics have serious negative effects on gut flora. Lastly, for serious cases of acne, which cause scars or just are not going away no matter what treatment, then Isotretinoin, which is a strong medication is often administered. It is a highly volatile medication with serious possible side effects such as fetal abnormalities and mood swings. Therefore, it is better to apply the natural remedy of slowing down unconscious breathing patterns.

Experience of our students shows that slower breathing gradually and naturally reverses a degree and the presence of acne. There is a very large reduction in acne when students get X seconds for the body-oxygen test in the morning (but you will need to make some efforts – do not expect this to happen overnight), and acne usually completely disappears when students have over Y seconds for the body-oxygen test 24/7. You can find out numbers X and Y in the bonus content below.

X is equal to 20 seconds for the body-oxygen test or the control pause test. Y is equal to 30 seconds.